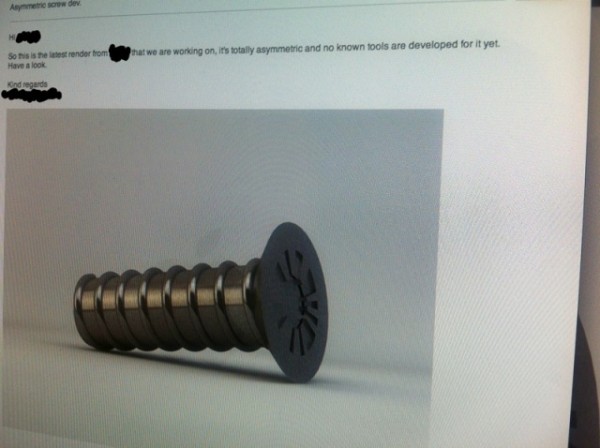 Apple has been known for their partial repairable products for a long time now. While not every aspect of an iPhone or MacBook is repairable, Apple has done a good job of at least letting us in our devices. That could all change soon…

If rumors are correct, Apple may be designing a special proprietary screw for their future devices. The shape of the screw is rather odd and would make it near impossible for a consumer to open up devices for repairs or mods. The above image came from a user on Reddit claiming that it’s a new Apple design.

While there’s no confirmation that this screw design is legitimate, it has the potential to be catastrophic to the repair industry if it materializes.

According to Kyle Wiens at :

If this were an Apple design, it would be concerning. Service technicians of all kinds need access to hardware. We regularly sell pentalobe screwdrivers to forensic investigators who depend on our tools for important investigations. Recyclers all over the world to dismantle products, and Apple has historically relied on the open market (third parties like us) to supply their recyclers with the tools they need to recycle Apple products.

My gut feel is that this isn’t from Apple. The threads are unrealistic, and I suspect that a head like that is too complex to use as a tool head. Existing tool designs tend to be simple because the head needs to withstand a fair amount of torque.

If this is an Apple design, it looks like it would be expensive to manufacture. Apple uses tiny screws, and that’s a lot of complexity.

The could definitely be the death of repairability if this screw comes to life. Apple seems to be moving towards devices that are harder to repair and this screw would definitely hinder and possible DIY fixes. This image is a rumor at this point, and the only truth to it being real is the Reddit user’s comment stating it came from Apple.

Apple has many different patents and designs that never see the light of day so don’t panic just yet. This could never actually happen.