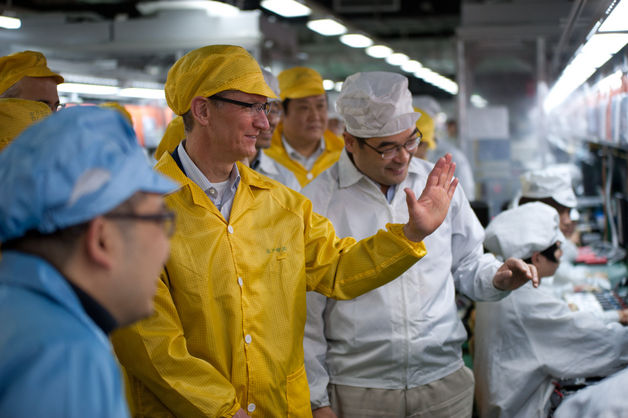 On Monday we told you about Tim Cook making a surprise visit to China. It was rather unclear why he had made the trip and many associated it with possible pre-production for the new iPhone or iPhone 5. He was even at a few Apple Stores being friendly and taking pictures with several iFans.

During his trip he also made a visit to Foxconn’s new plant in Zhengzhou, consisting of about 120,000 employees. This just so happens to be the new plant where the iPhone production line resides.

Hmmmm… Now why would Tim Cook be visiting Foxconn?

Maybe to be a friendly new CEO and shake hands? Is it just a coincidence that he happen to go to the plant that assembles the Apple iPhone?

Probably not but one of Apple’s Spokeswoman Carolyn Wu, confirmed Tim Cook’s visit to the Foxconn with Bloomberg via email:

The iPhone production line is at the new Foxconn Zhengzhou Technology Park, which employs 120,000 people. Carolyn Wu, a Beijing-based Apple spokeswoman, said in an e-mail today.”

It also could be a PR trick. Apple has been getting a lot of hate lately for the conditions over at Foxconn (a company they don’t own, might I add). Also there have been reports of a strike within Foxconn. So he could have been over there out of good faith. Either way the fact that he took time out of his busy schedule to go all the way over to Apple’s Chinese production plant just to say “Hi”, says a lot about the new CEO. But I still think there’s underlying reasoning behind the trip. Cough… cough… new iPhone.