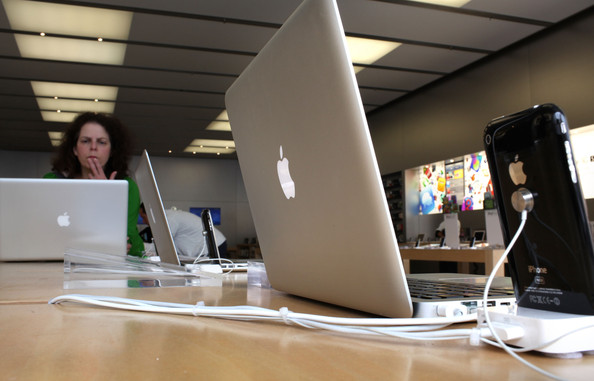 Apple Store’s are so classy. The layout and every detail down to how the products look in packages screams design and simplicity. But did you know Apple has more than just design in mind when they set up product displays? They actually strategically set them up to make you touch them…

Once you’ve touched and interacted with a device as powerful as the ones Apple makes, it’s hard to not want it. Every little detail of every Apple product is designed with your fingers in mind. No, I’m not talking about a touchscreen silly…

For example: Apple specifically angles the MacBook displays in a certain way so that you adjust them to your liking. Crazy right?

A post at Forbes by Carmine Gallo, explains how Apple slightly angles notebook displays to a certain degree (with an app called Simply Angle) to encourage customers to touch them. They want you to touch them.

The Apple Store pays attention to every detail. You might think that Apple positions all its notebook computers for aesthetic reasons. That’s partly true. The tables are uncluttered and the products are clean. But the main reason notebook computers screens are slightly angled is to encourage customers to adjust the screen to their ideal viewing angle—in other words, to touch the computer! It’s also why all computers and iPads in the Apple Store are loaded with apps and software and connected to the Internet. Apple wants you to see the display for yourself and to experiment with apps and web sites to experience the power and performance of the devices. Customers in an Apple Retail Store can spend all the time they want playing with the devices and using the Internet—nobody will pressure them to leave.

It’s tricks like this that set Apple’s intelligence apart from the rest. Darn Apple Store gets me every time. Sometimes it’s hard to leave without feeling the urge to spend money.

Source: Forbes via Cult of Mac