[Video] Hands On With The New MacBook Pro 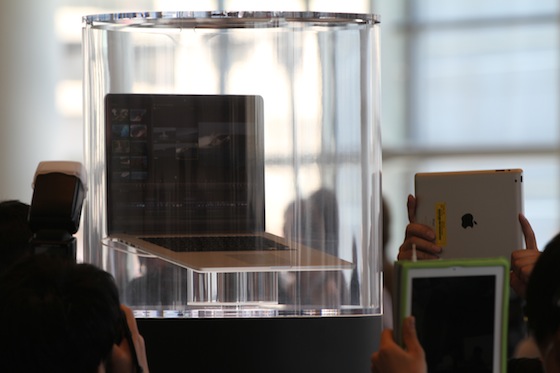 As we’ve noted, the New MacBook Pro with Retina Display was released today at the WWDC 2012 keynote. This new MacBook has an insanely high resolution, and looks gorgeous. The guys over at Engadget went hands on with the New MacBook and we have the video…

It’s 0.71-inches thick, or roughly 25 percent thinner than the current generation Pros (which, by the way, live on — except for the 17-incher). That’s just .03-inches thicker than the 13-inch MacBook Air, but it feels like quite a bit more. Where the Air is tapered, this has a constant thickness throughout. So, again, it doesn’t feel like an Air, but it’s a big improvement over the Pro.

On the right side you have an SD card reader, full-size HDMI port and the first USB 3.0 port. (Which, by the way, is not blue — Apple just made all the ports 3.0 and they’re all naturally white.) On the other side is the other USB 3.0 port along with dual Thunderbolt ports, a headphone jack and the new MagSafe 2 connector.