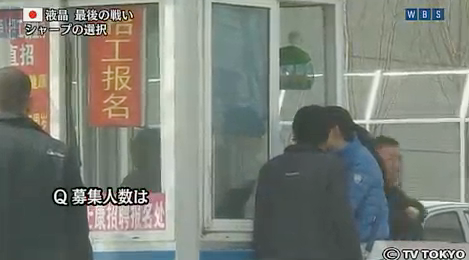 Today Macotakara reported that TV Tokyo’s World Business Satellite recently conducted an interview (Google Translation) with a Foxconn recruiter giving us some much needed insight on the production of the next iPhone. We’ve heard many different rumors surrounding the new iPhone recently and rumor or not, this is the best thee is so far.

Foxconn is known in the assembly of Apple products, has been the recruitment of 18,000 more personnel, personnel recruitment office says it’s recruiting for the production of iPhone 5.

During the interview a woman asked a Foxconn recruiter how many people Foxconn is looking to hire:

“We’re looking for 18,000 employees…for the fifth-generation phone,” he said.
“Is that because demand is high for the ‘iPhone 5?'” she asked.
“That’s right. It will come out in June.”

This rumor falls in line with Tim Cook recently making a surprise appearance at Foxconn last month. It also backs the mass hiring Foxconn has been up to recently.

On the other hand, it conflict with other rumors involving a Fall launch for Apple’s new iPhone.

If you understand the language, check out the video here. The interview starts at 7 minutes in.

What’s your bet on? Summer or Fall?