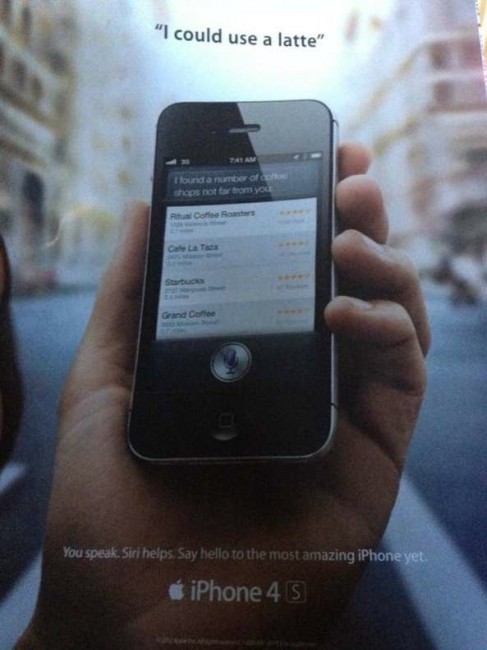 As most of you know, Siri is an exclusive feature to the iPhone 4s. The new personal assistant has been seen in various TV commercials in the US, and is definitely is part of the reason the iPhone 4S has done so well. Today AppleInsider reported on a different approach to Apple’s marketing campaign. Siri popped up in Rolling Stone Magazine on Monday. The print ad may not seem like a big deal, but this is one of Apple’s first.

Above is a picture of the ad seen in Monday’s Rolling Stone Magazine. (Picture from Philip Bernstein’s Twtter via AppleInsider)

The ad features an iPhone 4S displaying a list of coffee shops in San Francisco below the quote, “I could use a latte.” Beneath the iPhone is the phrase, “You Speak. Siri helps. Say hello to the most amazing iPhone yet.”

While Siri is still a beta feature, it plays a big role in keeping the iPhone 4S on top of the smartphone game. Certainly others will mimic, copy, and mock, but Apple can always say, “we did it first”.

If you weren’t sure how popular Siri actually is, a recent survey showed that 87% of iPhone 4S owners used at least one of Siri’s functions every month.