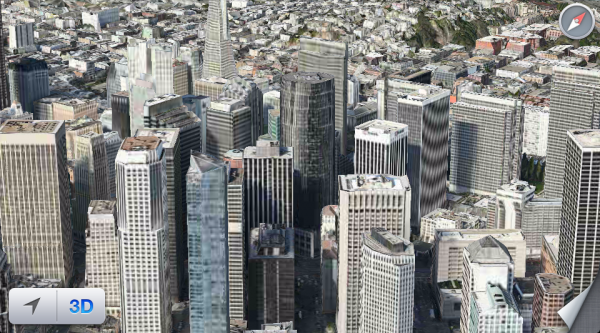 iOS 6’s flagship feature is the new 3D Maps Flyover feature. Apple ditching Google for their own in-house maps was a big move and has brought some impressive results thus far. Now reports are in that Maps may also be extending to Mac in the near future…

I honestly think it would be very awesome to have Apple’s 3D Maps on a Mac.If you’ve seen our iOS 6 Maps video, you know the new 3D Maps are nothing short of impressive.

The code below points to some possible Maps integration for Mac.

9to5Mac has the story:

Our developer friend, Cody Cooper has now stumbled upon an interesting code dump in iOS 6 maps application which hints at the possibility of Apple Maps coming to Macs in the near future.

During his routine investigation of Maps app, Cody found some interesting bits in the file altitude_manifest.xml

In this XML file, there is a reference to a set of Intel based graphics chipsets for which certain features like Shading are disabled.

This definitely isn’t solid proof that Maps will come to Mac, but it makes sense for Apple to integrate it. The fact that the code selectively disables shading could be compatibility restraints with lower model Intel chips.

There’s no word if we’ll see any Maps integration with the release of Mountain Lion, but that could be Apple’s little secret until the OS is officially launched at some point this month.