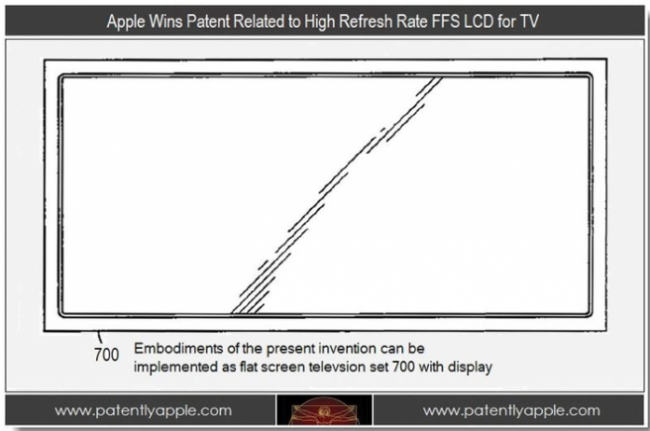 On a pretty regular basis the mill is flooded with rumors of a suspected Apple TV set. Nothing has really given us solid insight to anything that Apple may have had their hands in though. We’ve heard about the remote control patents, and even Jobs’s Biographer withholding information about an “iTV”, but nothing good enough to call “hard evidence”.

Today a patent was published by the U.S. Patent and Trademark Office gives information on an advancement of high refresh rate LCD technology called “fringe field switching”. Reported by PatentlyApple, Apple’s new patent pushes the advancements in technology enabling FFS for use with large screen HDTVs.

According to PatentlyApple, “Previous versions of FSS couldn’t accommodate such large displays.”

The technology is an off-shoot of IPS called S-IPS. It’s a technology that provides superior performance and color gamut with high luminosity. IPS technology is currently being used in Apple’s iMac – which stems from this patent… Embodiments of Apple’s granted patent and invention provide for a FFS TFT LCD with a high refresh rate without limiting the aperture of individual pixels. More specifically, embodiments of the invention provide for the use of common bus lines to reduce the effective resistance of the common electrode and to therefore allow for higher refresh rates of the display.

This type of advancement is definitely within Apple’s range, and this is the most solid evidence we’ve seen thus far. It’s best to understand that this is a legal patent filed with the US Government. So whether or not this exact technology materializes in a TV set from Apple, one things for sure, they’re looking into it.

Hopefully we’ll find out more of what’s in Apple’s “pipeline” later this year. Until then, fingers crossed.

Would you buy an Apple HDTV?