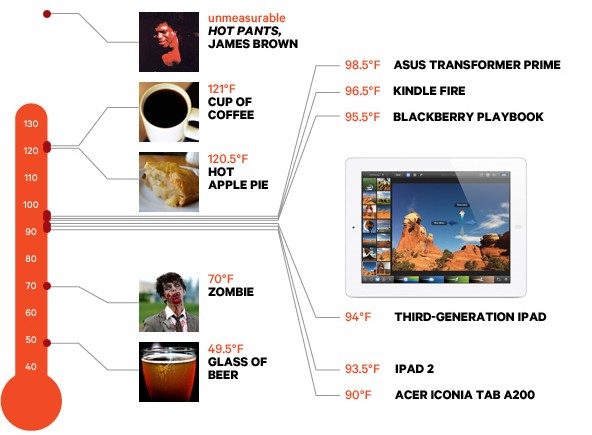 For the last week or so, we’ve been hearing different reports on “overheating” issues with the new iPad. The fact of the matter is, it’s not unusually hot…

In fact, the new iPad is actually right smack in the middle of the heat scale when it comes to tablets. Is this surprising that an electric device would heat up when your using it to play graphic intense, console style games? I mean come on. It’s not running 94 degrees 24/7. This really comes down to the media over-speculating on issues with new products.

Yes it’s a fact, the new iPad definitely runs hotter than it’s predecessor on average. But that’s not bad thing… I’m just getting annoyed with this whole “heatgate” scandal.

It looks like Wired totally agrees with me. They tested Dead Space across a handful of tablets and came up with some pretty realistic findings:

The result? The third-generation iPad reached just 94 degrees Fahrenheit in its hottest rear chassis location (slightly below, and to the right of, the Apple logo when the tablet is held in portrait mode). Ninety-four degrees is not an uncomfortable temperature in one’s hands, and it’s also well short of the alarming 116 degrees publicized by Consumer Reports, as well as our own 108 degree reading. Dead Space may not tax the iPad’s internals as much as Infinity Blade 2, but it’s still a demanding 3-D game in the tablet space, and will certainly evoke hotter run temperatures than a mail program, YouTube or Angry Birds during continuous use.

Here’s the results of their testing:

When Wired compared the new iPad to other tablets, there we’re a couple others that actually run hotter than Apple’s third generation baby. Are any of these results surprising? Absolutely not.

A tablet is a computer. The only reason why your computer still functions is because it has a fan within to rid the tower or structure of unnecessary heat. It’s actually quite amazing how we can fit the same technology inside of a sometimes, pocket-sized device without dealing with some of problems associated with components heating up.

At the end of the day, what’s packed inside the new iPad is definitely a “good excuse” for the 10-15 degree temperature change. It’s still less heat then some of the other tablets put out. Yes, the new iPad is on the high end compared to some tablets, but it’s also one of the fastest and best tablets your money can buy.

And if you don’t want to buy a new iPad, you could always win one! We’re giving one away to a lucky reader!