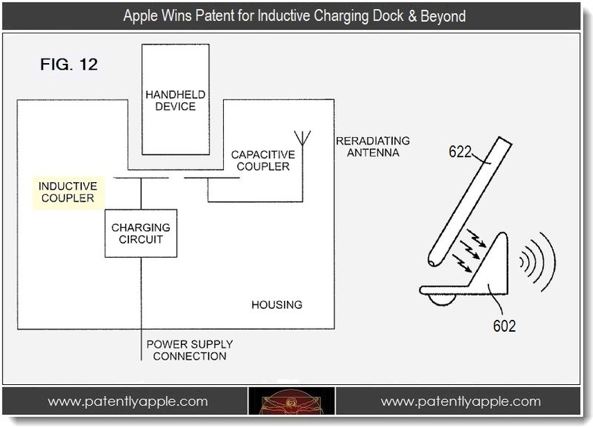 This is very interesting. According to PatentlyApple, the United States Patent & Trademark Office (USPTO) issued Apple a new patent this morning involving the ability to wirelessly charge your iOS device…

The dock would essentially cut the cord on charging and allow you to place your device on a special dock that would automatically start charging it through inductive technology. This is similar to what the PowerMat products do if you’ve ever seen those before.

The cool thing about this inductive charging is it would work on all sides of the device.

This would definitely be a game changer for iOS devices. Though it’s not certain this technology would be implemented any time soon. In fact, Apple applies for and wins hundreds of patents that never see the light of day. Though this one seems to make a little more sense in the adding functionality department.

Apple recently had a similar patent which described a certain type of “active packaging” for devices on store shelves. This same type of inductive charging was described there. This new inductive charging dock patent was originally filed back in 2008! It’s credited to Apple engineers Victor Tiscareno, John Tang, and Stephen Zadesky.

Four years to approve a patent means there’s some serious documentation to review. Could this be something Apple is serious about implementing in iOS devices for the future? Maybe we’ll see this on the new iPhone. Could that be the reason for the new unibody style design we’ve seen in leaked photos recently?