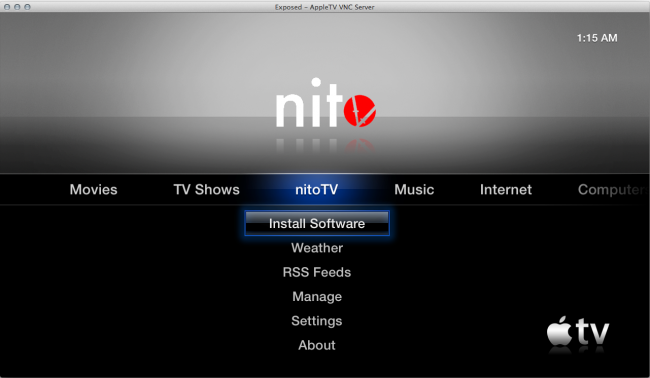 Lately there’s been a storm of conversation regard the new Apple TV and when it will acquire a Jailbreak. There are many different members of the Jailbreak Community working on it but so far, none have prevailed. This is due to the lack of possible exploits in the third generation Apple TV…

This is going to be much more difficult than anyone had imagined. It’s quite ironic since the Apple TV is the least expensive iOS device Apple currently offers. On the other hand, it also runs a fraction of the software which leaves less room for exploits.

The Official greenpois0n blog brought some thoughts and insight to the blogosphere in a recent post regarding the possibilities of a future Jailbreak:

I’m sure mostly everyone reading this article has probably heard MuscleNerds thought’s on jailbreaking the AppleTV 3, I echo his sentiments. I believe he said the “attack surface” is much smaller, I couldn’t have put it better. There is no built in default web browser, there are less services running, with no web browser and less services running there are fewer places to smoke/fuzz out a vulnerability. For instance, even if the AppleTV 3 was out before the iPad 2 and 4S were jailbroken with absinthe, it would not have been applicable, no mobilebackup to exploit for part of the injection vector. I’m not saying the AppleTV 3 is hopeless, however, without an A5 bootrom exploit being found, each AppleTV 3 jailbreak (after the first one happens) will be an uphill battle. Nothing earth shattering here, wish I had better news on this front.

The thing is, it’s not going to be impossible to achieve Jailbreak for the Apple TV, but it’s going to take time. This all adds up considering you only have one app running (AppleTV.app) on the Apple TV as opposed to many that run on other iDevices such as the new iPad or the iPhone 4S.

Though according to FireCore, creator of aTV Flash:

AppleTV 3 update coming soon! Order now and get access to both versions.

So as of now, it’s officially up in the air. But FireCore has been very confident about this subject lately posting various “teaser” images on their Twitter account. And I actually Just stumbled upon a new one that was posted just an hour ago.

A sneak peek at what’s right around the corner… twitter.com/firecore/statu…

We’ll keep you updated on all things regarding the Jailbreak for the Apple TV 3.

Also Check out our new iPad Giveaway! It ends on Sunday! Click here!