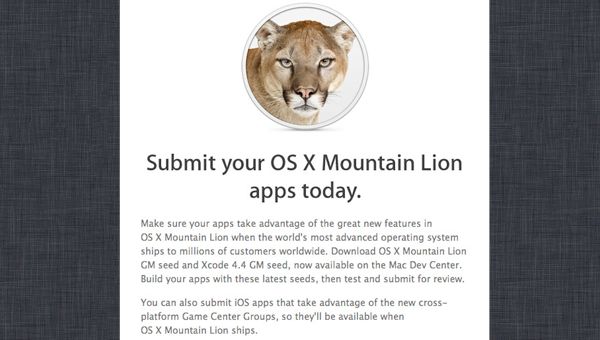 The Golden Master version of OS X Mountain Lion was just released, and now it looks like Apple is calling on developers to submit their Mountain Lion compatible apps for the Mac App Store. Mountain Lion is right around the corner…

The email below was sent out to resisted Mac developers:

Make sure your apps take advantage of the great new features in OS X Mountain Lion when the world’s most advanced operating system ships to millions of customers worldwide. Download OS X Mountain Lion GM seed and Xcode 4.4 GM seed, now available on the Mac Dev Center. Build your apps with these latest seeds, then test and submit for review.

You can also submit iOS apps that take advantage of the new cross-platform Game Center Groups, so they’ll be available when OS X Mountain Lion ships.

This email is probably a good hint that Mountain Lion will be dropping very soon. Apple’s latest OS is expected to arrive in late July for $19.99 on the Mac App Store.

I predict it will be released either this Friday (possible but unlikely) or sometime next week (my money is on Wednesday).

Are you excited for Mountain Lion?