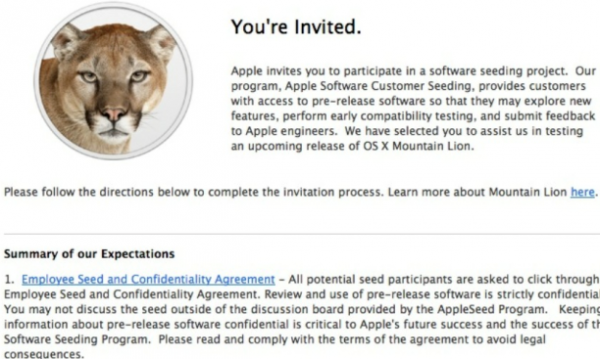 This testing is to be done on personal Macs belonging to employees, and is not standardized in-store OS X Mountain Lion training.

This works out great for everyone. Apple Store employees get a chance to become familiar with Mountain Lion’s new features, and Apple will get real-world testing experience outside of just those who are registered developers.

Sounds like a great opportunity to me. I’m sure Apple is in near-final stages of completing Mountain Lion, if it’s not already completed. This testing will ensure the OS is bug-free and completely user friendly. Retail employees will most definitely be familiar with Mountain Lion once it’s released next month.

It’s also important to note that if you’ve recently purchased a new 2012 MacBook Pro, you’ll be eligible for a free upgrade to Mountain Lion once it’s released according to Apple’s website. Another great reason not to put off your next MacBook purchase.

Are you excited for Mountain Lion?