The GameDock Turns Your iOS Device Into A Classic Gaming Console 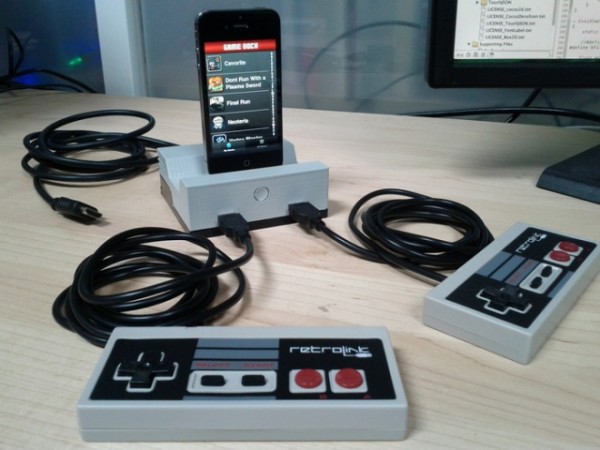 Don’t get me wrong, I love Apple TV. But sometimes it gets very annoying using AirPlay with games. There’s just too much lag sometimes streaming a game in full 1080p over WiFi. The GameDock aims to fix this problem…

The GameDock is a new project on Kickstarter from Cascadia Games. The device plugs into your TV through an HDMI connection and allows you to “play classic games the way they were meant to be played.” The front of the GameDock sports two USB ports for connecting retro-styled controllers to take your fingers off the touchscreen.

Check out the video below.

Just picture a Nintendo with your iPhone as the game cartridge.

Have you ever played a great retro game on your iPhone, only to be frustrated with the touch controls? Or have you wanted to play an awesome iPad game with a friend, but two people holding one tablet just doesn’t feel right? With the GameDock for iOS you can play classic games the way they were meant to be played: with two controllers and a TV.

GameDock is made to work with an iPhone, iPad, or iPod and will restore years worth of missed or forgotten retro ’80s gaming to your life. Apparently it’s already compatible with a good handful of iCade games (over a dozen.) So you’re ensured some classic game action right out of the box. I’m sure dozens more games will roll out compatibility once this starts shipping.

The GameDock will also come with it’s own app that will allow you to control your game library from the controllers instead of a touchscreen.

As some of you may know with Kickstarter, this needs your support to begin production. You can pledge any amount you’d like, but to reserve one of these babies, they’re asking for a starting contribution of $150.

With your money you’ll get the GameDock with one controller.

What do you think of GameDock?

Source: Kickstarter via Cult of Mac