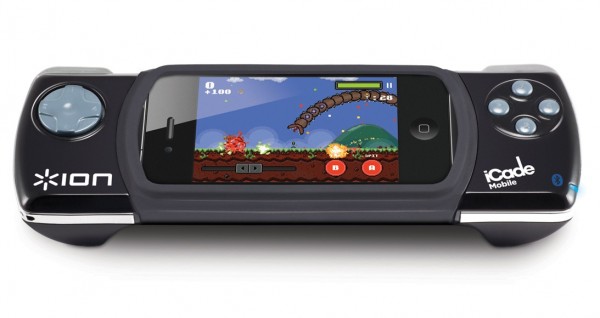 There have been quite a few game controls for iOS devices over the past years, but no implementation has stuck around quite like iCade. Now ION Audio is back with their latest little baby, iCade Mobile, and it’s made for iPhone and iPod Touch…

iCade Mobile has such a slick design. I was thoroughly impressed by the style implemented in iCade Mobile’s design. The controller is made of strong plastic and has an average controller quality to it. Nothing impressive about the build, but it certainly meets the “controller standard,” if such a standard exists.

iCade Mobile is compatible with over 100 games including popular titles such as Midway Arcade, Velocispider, and Temple Run to name a few.

iCade Mobile connects to your iPhone or iPod Touch and tricks your device into thinking its simply a Bluetooth keyboard. From there different keyboard strokes are assigned to the physical buttons on the controller and then mapped through development of the game. To put it simply, your iPhone uses keyboard keys to play the game that have been mapped out to the “iCade standard” by the game developer.

I’ve said this once, but I feel like you really get a great deal with iCade Mobile. It feels good in the hands, and it works very well. iCade Mobile is compatible with iPhone and iPod Touch (via an adapter) and has a fully rotatable dock. I can’t say enough good things about iCade Mobile and overall it’s a great controller.

I wouldn’t necessarily say I “disliked” the next few things, they’re more so improvement opinions. Though it’s important to note that these suggestions I have, if implemented, would certainly make iCade Mobile cost more than the $59.99 price tag.

That being said, I think the price is right on point and leaves you with a great deal but I still want to point out a couple things.

1. Once the iPhone or iPod is inserted into iCade Mobile, the speakers are blocked off. I think it would be great to see either cutouts for the speaker(s) or build in stereo speakers to attach through the 3.5mm headphone jack. This isn’t a deal break though since you can still hear the audio through the rubber “dock” of the iCade Mobile.

3. When the iCade Mobile is connected to your iOS device you’re unable to use the onscreen keyboard. This is not the controllers fault but how Apple has their Bluetooth setup. In order to use the keyboard, you must turn off the iCade Mobile and allow it to disconnect. From there the virtual keyboard will pop up. I understand though that ION Audio has no control over this, as it’s how the controller must operate.

Aside from the few suggestions I had, I think iCade Mobile is a great product. It really brings a handheld console feeling to your iPhone or iPod Touch. Though it lacks compatibility with some of the “true gamer” games like Modern Combat or N.O.V.A., I don’t believe that was ION’s intention. iCade Mobile is intended to bring a fun and interactive way to play games on your iPhone or iPod Touch and it does just that. At $59.99 it’s a pretty great deal!

You can pick up iCade Mobile here and get free shipping!