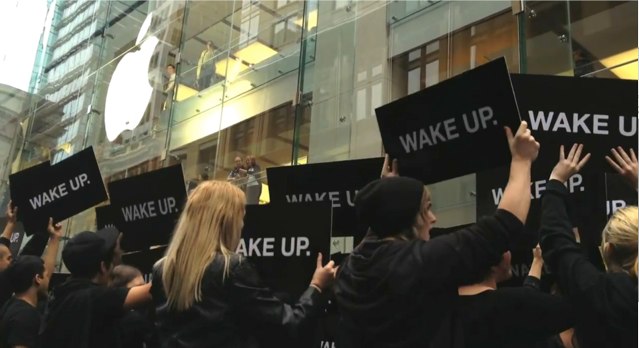 Samsung must be desperate. This is by far the most ridiculous marketing ploy I’ve ever seen. Samsung really tries to hate on Apple by means of mildly funny commercials hyping their Galaxy line, but this time they took it to another level.

Check out the video inside…

Update: RIM has come forth and claimed responsibility for the Apple Store Flashmob!

A local blogger happened to be inside the Apple Store at the time the flashmob arrives. The result was a completely embarrassing attempt at what was said to be marketing for the Samsung’s Galaxy S III. It’s recently been discovered that Australian creative agency called Tongue organized the clever attack. The marketing scheme was traced back to Tongue by marketing blog Mumbrella:

The ‘Wake up.’ campaign has also seen the words written on the bottom of Bondi Ice Bergs pool, as well as on a series of billboards placed around town. There was also a site takeover on news.com.au over the Anzac day holiday.

So apparently we’re all having some glorious Apple dream and need to “Wake Up!”. Personally, I’d rather sleep that jump on the Samsung train. Apple stuff is just way cooler…

What do you think about Samsung’s marketing against Apple?