With WWDC 2012 right around the corner, there’s a lot of talk about new “Retina-ready” MacBooks launching. While I still have my reservations about this being true, it looks like I might be putting a sock in my mouth soon. A “Retina-ready” app has been spotted in the Mac App Store, which only means one thing. Or does it…

The latest update to FolderWatch shows “Retina graphics” as one of the new features. Why on Earth would they include that in their description? One could argue that they included the display format on simply a hunch that Apple may release a Retina MacBook. We’ve seen other developers jump on an early train with the new iPad. But this would be based purely on speculation and rumors for developers and can certainly be a time/money wasting upgrade if their wrong.

Another thing that may be convincing is Apple must approve all apps and descriptions, features, etc before the update or new app will show up in the App Store. Did Apple sign off on this update? We’ve seen other apps with shady or illegal functionality slip through the cracks, but is this the case here? In support to this rumor, we’ve also seen “Retina-ready” icons found in Mountain Lion as well. 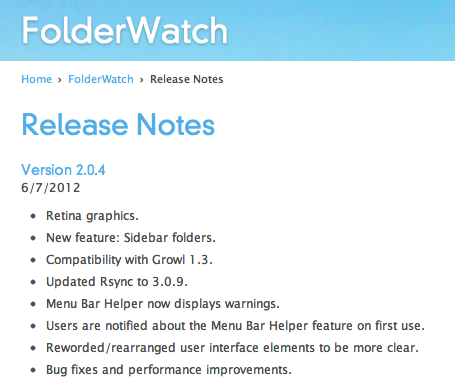 FolderWatch, an app that syncs your files between different places, was also featured as an “Apple Staff Favorite” back in June 2011. I still think based on that, alone it’s highly unlikely Apple would leak information to the developer about any new features in the upcoming MacBook lineup. Nor would they allow the new features to be “accidentally” leaked just days prior to their official announcement. That’s certainly not how they run things on the regular.

Maybe Apple has intentions on using this app to show off the “resolutionary” MacBook displays at WWDC, but again, I don’t see them just letting this information leak out. And if it wasn’t supposed to be, I’m sure someone lost a job. Is this a coincidence? The developers certainly could have just updated the app with high hopes. But like I said, it did pass through Apple’s approval process. Ugh.. I’m now a bottle of mixed emotions.

Source: Mac App Store via The Next Web