iOS 6 Will Require Permission For Apps To Access Personal Data 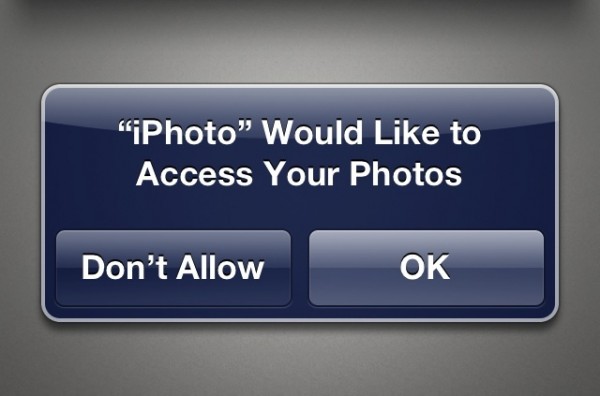 According to a report published by MacRumors, iOS 6 will now prompt you before allowing any app to access your personal data, including your contacts, calenders, reminders, and photo library. In addition iOS 6 also includes a privacy section where you can manage which apps can access your data and which apps cannot…

From the “Data Privacy” section in Apple’s iOS 6 release notes:

In addition to location data, the system now asks the user’s permission before allowing third-party apps to access certain user data, including:

For contact, calendar, and reminder data, your app needs to be prepared to be denied access to these items and to adjust its behavior accordingly. If the user has not yet been prompted to allow access, the returned structure is valid but contains no records. If the user has denied access, the app receives a NULL value or no data. If the user grants permission to the app, the system subsequently notifies the app that it needs to reload or revert the data.

This is very similar to what Apple is doing with Mountain Lion where users are prompted any time an app wants to use their personal data. This along with Gatekeeper, which also made it’s debut in Mountain Lion shows just how seriously Apple is beginning to take privacy.

As the iPhone and iPad have grown in popularity Apple has come under increased scrutiny over privacy policies. It is not certain whether the new privacy settings were Apple’s idea or whether they are acting based on the pressure they have been receiving from Government agencies and representatives over the past couple of years. Last year Senator Al Franken asked both Google and Apple to require app developers to have “clear and understandable” privacy policies.

Congress has also gotten involved over the disclosure of information to app developers, even going so far as to introduce a bill that would require companies to get explicit authorization before disclosing the users location to anyone. During the initial setup process Apple now asks iOS users if they would like Location Services to be enabled.

iOS 6 is currently in beta and is expected to be released this fall.

Source MacRumors via Cult of Mac