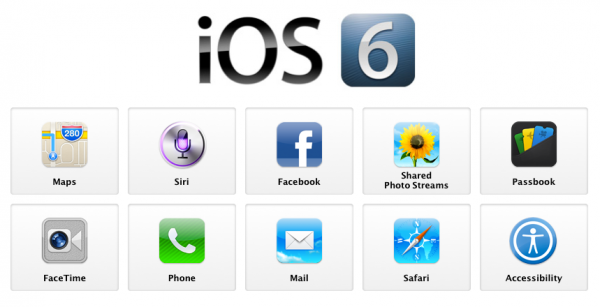 iOS 6 was just announced today at the WWDC 2012 keynote. This new version of iOS brings a lot of new features! Since the announcement Apple has launched the official iOS 6 page that gives a rundown on everything included…

iOS 6 gives you more features to make the things you do every day even better. It’s coming this fall, and it’s free and easy to upgrade wirelessly on your iPhone, iPad, or iPod touch — the moment it’s available.

Apple is bringing a whole new Maps experience to iOS 6 with new 3D Maps. It will also bring Siri to the new iPad. iOS 6 is also going to bring full-onFacebook integration, new features to Siri, the new Passbook app, Shared Photo Streams, and much more!

iOS 6 will support the following devices:

Yup sorry kids, no iPad 1 support as of now. Not sure why they went that route but it certainly looks like it’s not happening.

For a full list of features coming to iOS 6 check out the dedicated iOS 6 page on Apple’s website! Also if you’re a developer, the betas are available now!