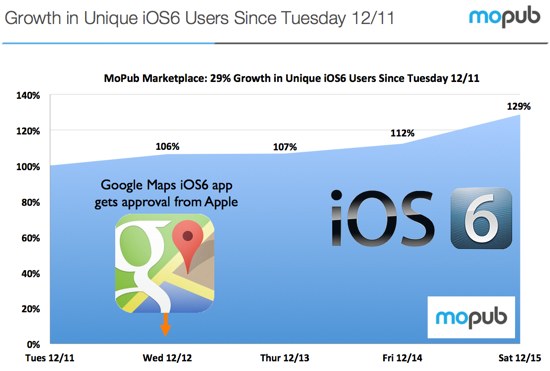 Would one app really prevent iOS device owners from updating to iOS 6? Apparently, everyone was waiting for a better alternative to Apple Maps. According to a recent study, iOS 6 adoption is up 29 percent since Google Maps hit the App Store.

Ad management platform MoPub has noticed a big rise in iOS 6 users. The company currently supports ads in 12,000 apps, so you know these numbers are based on strong statistical data rather than speculation.

“We observed since the launch of Google Maps for iOS 6 a 30 percent increase in unique iOS 6 users, and we think it’s related to Google Maps. It verifies that hypothesis that people were actually holding back to upgrade until Google Maps was available.”

While we can all agree that iOS 6 Maps hasn’t been the best since its launch, I think more factors come into play here. All of Apple’s new devices come with iOS 6 preinstalled. Since it’s the holiday season, I think there are probably a good handful of people who were recently given an iOS device or purchased one at a good price.

It does, however, appear that MoPub’s data is inconsistent with a report from mobile ad network Chitika who only saw a 0.2 percentage increase of iOS 6 users. Though, it’s important to note that MoPub does have a wider data set over a longer period of time.

Either way, the numbers don’t lie and there’s definitely more users jumping on the iOS 6 train. It’s a win-win situation. Google’s app is popular and Apple gets everyone on the latest version of iOS.