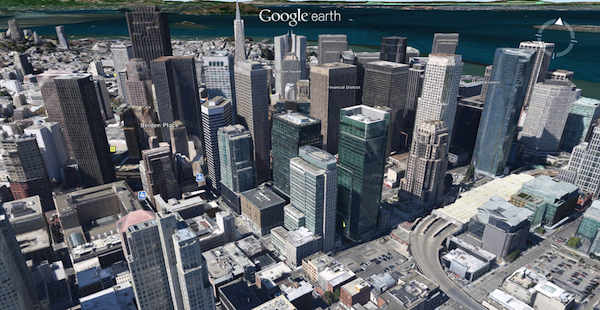 If you haven’t checked the App Store yet today, you probably don’t know about this new awesome update for Google Earth…

Google has just released a new version of Google Earth that now brings 3D Maps to iOS months before Apple’s launch of iOS 6.The next version of iOS will include a new “Flyover” feature which Apple has been developing to compete with exactly what Google Earth gives us with this update.

The new feature is pretty awesome, adding a “3D Buildings” layer to the mix. Overall the buildings look great and will certainly give Apple some competition once iOS 6 is released.

Google today is updating its Google Earth app on Apple’s platform to include the same 3D imagery it showed off in early June. That same feature rolled out to users on Google’s Android in late June.

iOS users are getting those same 14 regions, including Los Angeles, the San Francisco Bay Area, Boston and others. As Google adds more 3D cities to its database, both those platforms will get them at same time.

The only reason I can see users sticking with Apple’s Maps app is due to the fact that it’s native. Other than that, the feature is pretty comparable and works great.

I suggest that you download Google Earth and check it out for yourself. It looks pretty awesome and it’s fun to look at the world in 3D on an iOS device. The new 3-D feature requires an iPhone 4s, iPad 2, or third-generation iPad. But you can still update the app on lower devices.