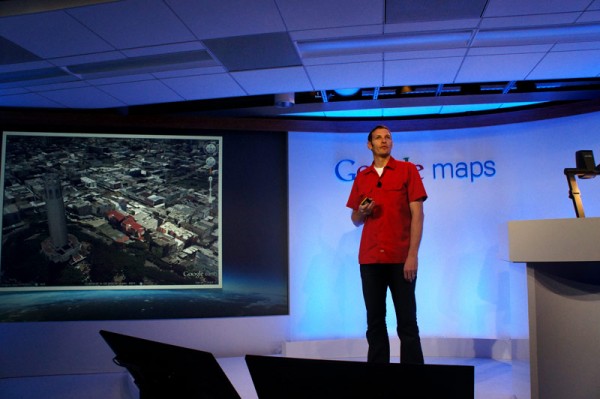 As rumors continue to circle Apple’s announcement of a new 3D maps feature at WWDC next week, Google steps up their technology with a new announcement. Today at Google’s Keynote on Maps, they announced many new and pretty awesome features including the rumored 3D Maps…

Many features were announced Today. Here’s a rundown of what I’ve gathered…

Google Offline Maps was announced for Google Maps on Android. This new feature allows for you to download specific maps in any area which will provide offline viewing. You won’t need an internet connection anymore to view Google maps. This may be something we’ll also see Apple unveil next week at WWDC when they present their new solution to replace Google Maps.

Engadget reports that all of Google’s new features will be available for iOS as well.

[Peter Birch, Product Manager for Google Earth] did an admirable job of dodging the obviously asinine bits, but continued to impress upon the crowd that Google itself was “committed” to bringing all of the features in Maps — 3D, offline, turn-by-turn, etc. — to iOS and other platforms.

This could be some hefty competition for Apple.

The Evolution of Street View

Street View is being enhanced to provide a backpack-like street view tool to provide walk-around views for Google Maps. This will provide views of destinations currently only viewable by foot. This is pretty amazing though. You’ll be able to see what it’s like sitting on a Gondola in Venice, or walking down an alleyway in Paris. Pretty big step in mapping technology here…

According to Engadget’s interview with Luc Vincent,

[The new Street View backpack] took around a year to build, relying on a low-power computer with Android onboard and an application that does little more than “start and stop recording.” It taps into 15 five-megapixel cameras up top, with all of the imagery being captured locally to a hard drive. From there, it’s brought back to Google, stitched and analyzed, before being uploaded to the web.

Google Announced 3D Maps, yeah I’m sure Apple is going this route now… They gotta keep up with Google. I’m sure some of these details will fall in line with what Apple has planned for WWDC next week.

Google has created a method with automated technology to extract 2D from areal images. Planes are equip with Google cameras that take 45 degree angled shots from every direction. They are flown in a controlled pattern to be able to represent the buildings and structures accurately. Woa… Google has planes now?

I hope Apple has done their homework… This seems intense.

They then use technologically advanced 3D models to apply the images taken to generate a “textured 3D mesh.” Google then packages the information efficiently to store and transmits over all networks using minimal bandwidth.

The maps look pretty amazing, and if Apple isn’t planning on ditching Google I sure hope they are using this new Google feature. The interaction is astonishing. Just by looking at the demo from the keynote, it really creates an areal illusion and allows you to look at every single building from all sides. All the building are modeled, even ones that aren’t important. I have to say I’m pretty impressed with these maps. Let’s hope iOS 6 brings us something exciting like this or I’ll be downloading Google Earth pretty soon…

LOL during the Keynote, they were having trouble using an iPad… Go Figure.

Apparently this will also be available for Google Earth on the iPad. Hopefully Apple is taking notes here. These are some serious features that will definitely make Apple’s “new maps” inferior to Google if they don’t play their cards right.

“In the coming weeks, we’ll bring this 3D imagery to both Android and iOS devices.”

According to Engadget, some actually asked this question:  “Are you worried that Apple will build a maps system better than yours?” They received an avoiding and witty answer, “We’ve shown today lots of new features that we’re super proud of.” Okay??? And???

Wouldn’t it be funny (though unlikely) if all these 3D map rumors for iOS 6 were actually Google’s new 3D Maps? Google just didn’t want Apple to out their awesome new feature first so they setup an early keynote? I know that’s an unlikely scenario, but it sure would be hilarious…

Well either way we should be seeing this major update to Google Earth for iOS in “the coming weeks.”