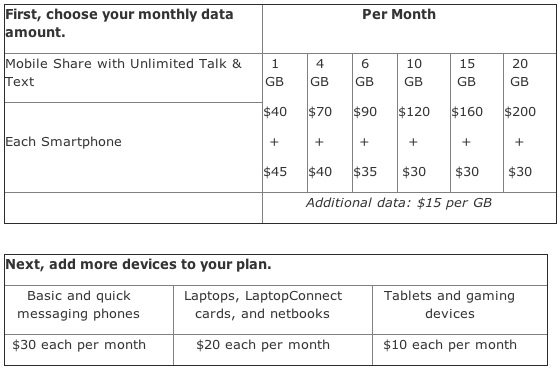 Yesterday, AT&T’s CEO dodged questions on possibly charging for Apple’s new FaceTime over cellular feature in iOS 6. It was unclear what the company was planning on doing when rumors sparked from a discovery when attempting to enable the new feautre. Today AT&T announced new shared data plans which may explain the CEO’s short answer about the recent rumors…

With AT&T Mobile Share plans, customers start by choosing how much data they want each month, then choose up to 10 devices to attach to their shared plan, one of which must be a smartphone. Each plan includes tethering and unlimited domestic calls and texts for smartphones and basic or quick messaging phones. The larger the data bucket you choose, the less you pay per gigabyte and the less you pay for each smartphone added to the shared plan

As you can see in the chart above, the plans are fairly inexpensive. Customers will not be required to switch to the new plans, and new customers will have the option between Mobile Share and the standard individual plans. The plans are said to be available in “late August.”

This sudden announcement makes me wonder if AT&T’s CEO pushed this out ahead of schedule due to the recent rumors on FaceTime over cellular charges. But there’s no word on that, and currently nothing links the two.

What do you think of the new Mobile Share plans?