Will AT&T Charge For FaceTime Over Cellular? 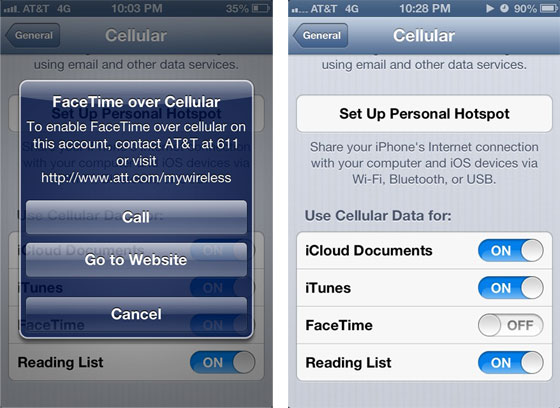 Back in June at WWDC, one of the big “new” features for iOS 6 was FaceTime over cellular. We’ve heard this promise before, but carriers always seem to shut down the operation before launch, this remains true in iOS 6. At least for AT&T customers…

As of now it looks like AT&T is going to either restrict or charge for the supposedly native iOS 6 feature. Users have reported these finding in the MacRumors forums but the issue doesn’t seem to impact Verizon or Sprint customers.

According to MacRumors, AT&T issued a new statement on the matter which is almost identical to the first one they made on the iOS 6 feature.

We’re working closely with Apple on the new developer build of iOS 6 and we’ll share more information with our customers as it becomes available.

Looks like AT&T has plans to make you pay for FaceTime. We can’t be certain how this is going to turn out, but carriers are weary about losing precious data and bandwidth.