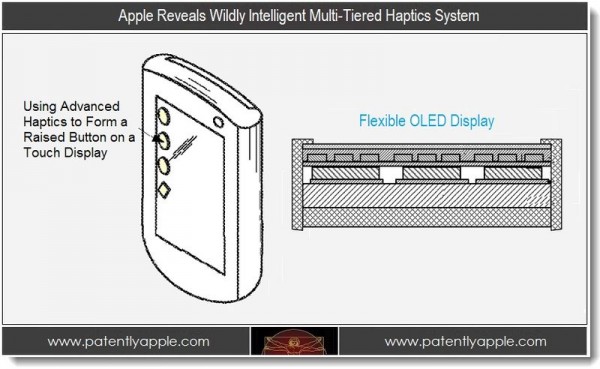 Hours before the release of the new iPad, a rumor surfaced that Apple would be implementing Senseg’s new haptic feedback into the third generation tablet. This rumor was ultimately shattered shortly after during the iPad keynote.

But don’t doubt the possibility of this in future devices…

…The system will actually allow an iDevice display to deform so that it could provide the user with a button, an arrow or even a geological map to physically pop right out of the screen to give it 3D depth. If that wasn’t cool enough, Apple’s patent discusses a flexible OLED display that could be used for video glasses…

Apple’s latest invention relates to systems and methods for providing layered haptic controls. Haptic systems may be used for actuation such as vibration, shape change (e.g., contouring a flat surface), or other suitable actuations or combination of actuations which may provide tactile feedback to a user.

Shape shifting?? What?? Apple is definitely on some next level material!! I highly encourage you to go read the full overview of this patent and come back here for discussion. It’s quite amazing!! This isn’t the first patent from Apple like this but it’s definitely the most innovative and intriguing.

I doubt we’ll see anything like this in the upcoming iPhone release, but it’s definitely something Apple is looking at for the future.

What do you think about haptic feedback on an iPhone?