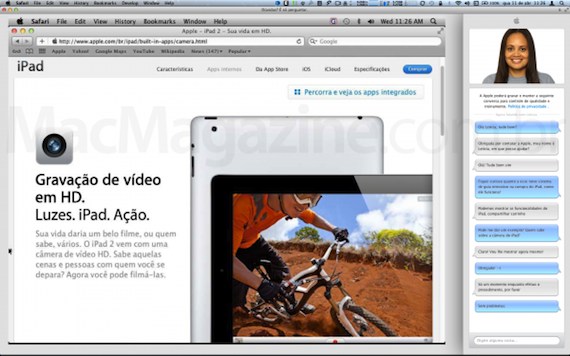 The other day, the Apple Store Online was taken down for several hours. Many speculated this could be due to a design refresh for the current cluttered online store. Apple even had a different “We’ll be Back” note in place of it’s older original yellow sticky note the site has used in the past.

But when the site was put back up in the early hours of the morning, there wasn’t really any notable differences.

But according to reports from MacMagazine, Apple was busy testing out a new virtual tour feature for it’s online store. The new feature is reported to allow Apple sales specialists to demonstrate Apple products for potential customers online.

Apparently, Apple was caught in the process of testing this new feature. MacMagazine took the screenshot above of Apple testing the new screen sharing feature on it’s Brazilian site.

Here’s an excerpt from MacMagazine via Google Translate,

“But if you want more details about a particular aspect of the product may then request a guided tour. When the wizard you want to help you in this way, a small confirmation popup window appears at the bottom of the window.

After confirming his desire to see the screen of the expert, the window of chat going to take the entire length of the screen of your Mac Chat is in the right and the left one can see in real time, the screen wizard.”

Looks like eventually you won’t have to go out to your local Apple Store, the experience may be coming to a web browser near you.

What do you think about this?