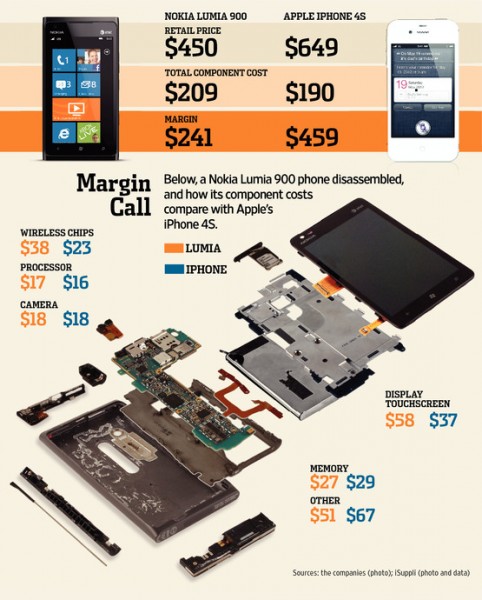 The Wall Street Journal recently published an article highlighting the reasons why Nokia isn’t even close to challenging Apple’s iPhone 4S. One of the major reasons is that Nokia makes more than $200 less with their Lumia 900 than Apple makes with the iPhone 4S…

Part of Nokia’s problem is that they have to pay more for their components to make the Lumia 900 due to Apple’s strangle hold on the global supply chain. Another reason for the large gap between the Lumia 900 and the iPhone 4s is that Nokia is forced to sell the Lumia 900 for $200 less just to be able to compete in the iPhone U.S. driven smartphone market.

Nokia’s top-of-the-range Lumia 900 costs $200 less than the cheapest iPhone 4S. But Nokia pays more for the parts. Ben Rooney in London explains how big a problem this is for Nokia.

The findings indicate Apple makes nearly twice as much on iPhone sales as Nokia does on the Lumia 900, excluding costs like manufacturing, marketing and distribution.

This is a great example of how truly hard it is to even put a dent into the machine that is Apple. The only way for Nokia to really compete with the iPhone is to sell the Lumia 900 at a lesser price, but because Apple orders components in such a large amount they get a huge discount, which ends up leading to substantially smaller profit margins for their competitors.

Apple’s current stranglehold on the industry has literally made it impossible for anyone to compete with them in the smartphone market.