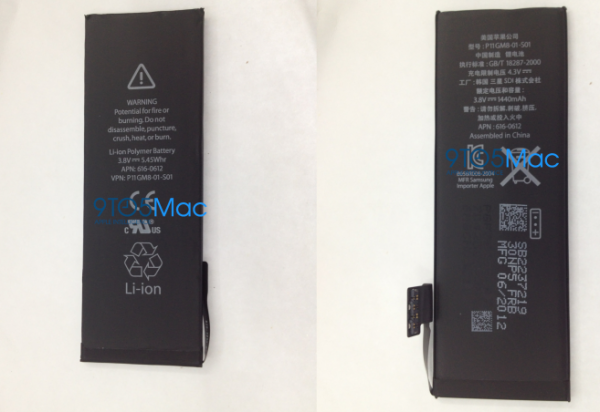 We’ve seen many different leaked photos surface of the next-generation iPhone. We’ve seen enough to practically put together a virtual iPhone. Now a new picture of the purported new iPhone’s battery has surfaced and it’s only marginally larger in capacity…

The new battery photos show a slightly modified battery. The images were acquired by Sonny Dickson and posted by 9to5Mac. There’s no confirmed source of the battery photos, but they look to be about the right size.

9to5Mac has the details:

According to the battery’s labeling, it appears that it was produced in June, 2012. That’s right on schedule for next-generation iPhone component manufacturing.

There are a couple caveats to a battery with this capacity. The leaked battery only appears to be 10 mAh higher than the current generation iPhone. Is that really enough to power a larger screen and LTE while keeping optimal performance? Apple would have to do some serious engineering to make the new iPhone more power efficient for this work out.

Another theory of mine is this could very well be the battery for the new iPod touch. That would make a bit more sense given the capacity and without any major breakthroughs in processor chip-power engineering. Regardless, this is a leaked photo of a battery for one of Apple’s future devices.

We’ll all soon find out when Apple announces their new product line for 2012. The new iPhone is expected to be released in September or early October so I guess the truth will be revealed then.