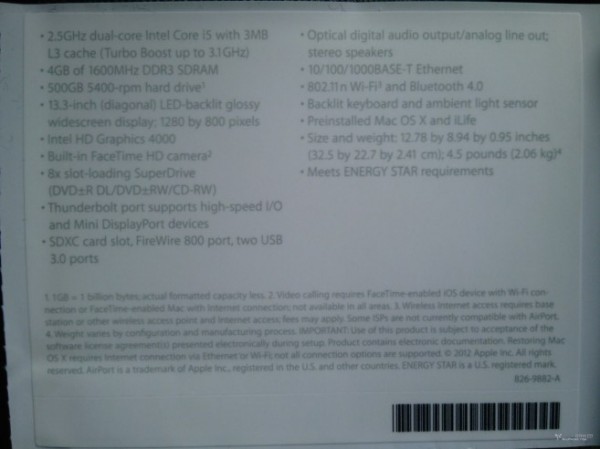 There’s been a lot of hype surrounding Apple’s next-generation MacBook Pros lately. The new MacBooks are expected to release at WWDC next week. But if these leaked specs are true, I’m definitely not interested…

This leaked photo comes from Chinese forum, Weiphone. The picture is said to have came from “friend inside Apple,” so there’s really no way to verify its authenticity.

The leaked specs are marginally better than what’s currently on the Apple Store table. No Retina Display, slight bump in speed, USB 3.0, nothing to get excited about. Aside from the 2.5GHz Ivy Bridge chip, and USB 3.0, these might as well be exactly the same. It’s not even thinner.

I sure hope this isn’t true. Then again, in Apple’s mind they may want to save the major hardware upgrades for the more “high-end” 15-inch models. But normally there’s never been fragmenting of MacBooks in the same generation. If these are 100% accurate, we may see these same marginal upgrades across the whole line.

If the new line of MacBooks are introduced next week at WWDC, we’ll have a lot more information for you.

Are you surprised by these rumored specs?