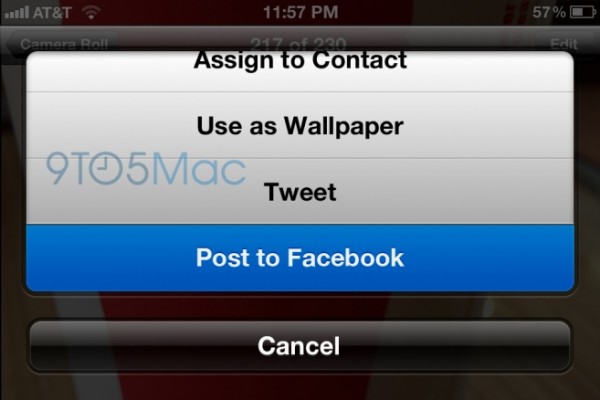 Last week TechCrunch reported on rumored system-wide Facebook integration in iOS 6. Reports are in today from 9to5Mac apparently confirming this information through their sources familiar with iOS 6…

The image above is simply a mockup of what 9to5Mac thinks this integration would look like, but it’s probably not far from true. The iOS camera app is one that would definitely benefit from having Facebook sharing. Did Apple and Facebook finally learn to work together?

A feature called “App Liking.” Discoverability has always been a major downside of the Apple mobile apps market with hundreds-of-thousands of software apps, but Apple will by relying on the world’s largest social network to help fix that problem. Inside individual application pages on the iPad, iPhone, and iPod touch App Store will be a standard Facebook “Like” button. If a user is logged into Facebook via iOS Settings, these app “Likes” will be sent to their Facebook Timelines. Accompanying status messages will also be an option.

Though all these details are rumors, 9to5Mac says their sources are familiar with the details. All of this doesn’t seem too farfetched either. Sharing photos to Facebook, and liking apps is nothing special but definitely has major benefits.

It’s also important to note that the desktop version of iTunes already has integrated Facebook sharing for apps. After WWDC unveiling next week, we should know a lot more about iOS 6.