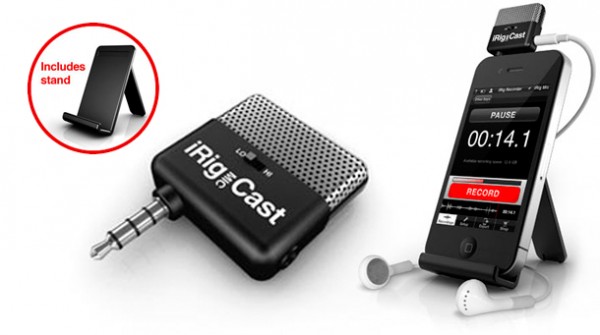 iRig MIC Cast from IK Multimedia is a small portable voice recording microphone for iPhone, iPad, and iPod Touch. It may be small, but it packs a mean punch…

We first learned about iRig MIC Cast at CES 2012. Initially I had small expectations from such a small device like iRig MIC Cast. Not exactly in a negative way, but for the size, one would assume it would be more comparable to an inline ear-bud mic than say a condenser microphone.

iRig MIC Cast is a unidirectional microphone that really does minimize background noise. In the video above, I demonstrate the MIC Cast’s quality and it really gives Canon’s on-board camera mic some stiff competition.

The sound this little guy sucks in is nothing short of amazing. I was thoroughly impressed with iRig Mic, and to hear this little guy output comparable sound was insane.

I was completely shocked when I heard the sharp, crisp quality of iRig Mic Cast. As you may have heard through the video above, the quality from iRig MIC Cast is pretty legitimate. I love iRig Mic, but being able to carry this little guy around for interviews instead of a Mic with a cable is pure awesomeness.

iRig MIC Cast also comes with a mini stand for your iPhone/iPod Touch. There’s nothing amazing about the stand, but it’s certainly notable that it’s included. The dual gain setting has to be my favorite feature of iRig MIC Cast. Being able to quickly adjust the sensitivity right on the Mic is great. Using the headphone jack on the MIC Cast, I can monitor the audio in real-time to make sure my levels are correct.

I travel to a lot of tech conferences and interview different people. Given the compact quality, naturally iRig MIC Cast is always going to be my first choice from here on out.

Honestly there’s absolutely nothing to dislike about iRig MIC Cast. It under promises with it’s small form-factor, yet over delivers in audio quality.

iRig MIC Cast is great for any audiophile. Whether you want to record a song, or need to conduct an interview this little guy has everything you need. In my opinion it’s quite a steal at only $39.99.

Don’t let the size throw you off, iRig MIC Cast is BIG sound in a little package.

For more information on iRig MIC Cast or to buy one click here.