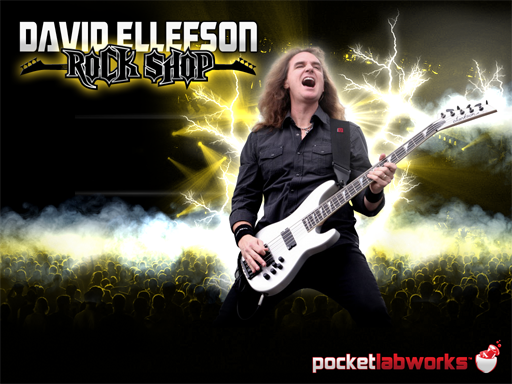 This week Dom had the chance to talk with David Ellefson, the co-founder and bassist of the legendary thrash metal band Megadeth. His new app “David Ellefson Rock Shop” turns the iPhone, iPad, or iPod Touch into a mobile practice studio for guitar and bass players. Check it out here. It’s on sale this weekend for only $4.99!

We will be featuring a full-length interview with Ellefson on our Podcast, The “A” Word as well, so be sure to listen in!

Dom: The iOS revolution with music is obviously a very popular movement right now, do you think it is something that will eventually replace physical amplifiers and analog stuff, like records were replaced by CD’s?

Besides your Rock Shop app, what your favorite iOS music app?

To be honest with you I’m kind of new to the whole thing. When you as an artist, are able create some of your best work, it’s because your not so influenced by everything else that’s out there. So I didn’t go into this app saying here’s what the marketplace is, here’s what’s on the market, here’s a hole, and how can I fill that hole for the customer? I mean I didn’t really come at it from a marketing point of view, I just came at it from, I’m just a dude who plays the bass and plays the guitar and I like to create and write songs.

For me really a lot of it was formed around, hey this is great if I have my device on the road with me anyway, be it an iPhone, iPad, or an iPod; If I can get rid of having to bring an amp simulator, guitar cable, an interface, and 1/8-inch cable to plug into my computer, headphones, basically a whole bag of cables, stuff, and clutter; If I can leave that at home and I can just plug into this device I already have on the road with me, and I can do everything within one App on one device, man right there I just cut 5 pounds out of my baggage. This app was really just born out of the convenience I was looking for as a traveling musician.

How did your partnership with POCKETLABWORKS come about?

Kevin Robertson the owner of POCKETLABWORKS, I guess was a fan of mine, at least of the music. He really liked how active I am out in the social media circle. So contacted me through my website, davidellefson.com, and he offered to send me an iRiffPort. And so he sent one to me, I plugged it in and I really liked it. I liked that I could access my iTunes library, I liked that I could dial up tone. And it gave me another use for my iPad.

Well then my thirteen year old daughter, who’s starting to become a pretty accomplished guitar player started playing it. So I called up Kevin and said Guess what? My Daughter has hijacked my iRiffPort, can I get another one from you. And that set the thing in motion. We just kind of struck up a friendship and started brainstorming about how we could take my Rock Shop Brand and his infrastructure and turn it into an app. From there we tweaked the parameters of course so they would be very specific to the tones that I like for both guitar and bass.

To hear the full interview with David Ellefson, be sure to listen to our Podcast tomorrow night, or download it here on iTunes Monday.