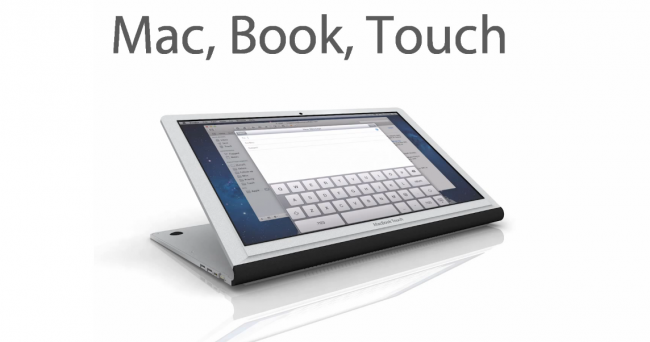 We all know how well the new iPad has done. The iPod Touch Changed the music world. And The MacBook revolutionized our expectations for a laptop. But what if all three of these somehow combined? Check out the video…

I present to you with, the MacBook Touch. This is obviously a conceptual design. But it’s pretty interested and obviously the technology is readily available to make something like this materialize. I think it would be pretty sweet! But then again, I’d have no need for an iPad if Apple had a 360 degree hinge folding MacBook. (Which I’d pay big bucks for…) The video above was contributed via comment on 9to5mac, and we thought it was pretty darn interesting.

As cool as something like this is, I don’t think it’ll be in Apple’s lineup anytime soon. Like I said it would eliminate the need for some people to buy an iPad, and that’s not a financial road Apple‘s likely to take. Though it’s important to note that Apple has been trying to unify the MacBook and iOS experience in the past couple years so I guess anything’s possible.

Would you buy a MacBook Touch?

If not, maybe your an iPad lover and you should definitely check out our new iPad giveaway which ends this Sunday!