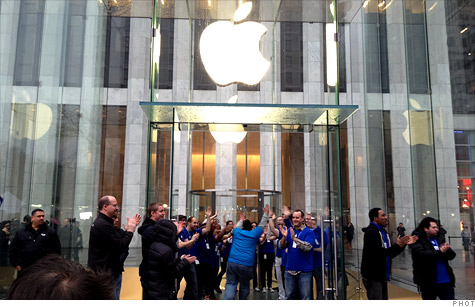 The new iPad (which has already sold 3 million units since Friday) is expected to increase it’s sales year-over-year by a whopping 156% and eventually exceed the entire PC market share on it’s own. Gene Munster an analyst with Piper Jaffray believes that most analysts expected the Apple to sell between 1 and 2 million iPads over the last weekend. But Apple easily crushed those projections when they announced on Monday that they had sold 3 million new tablets over launch weekend.

Those sales numbers suggest that Apple will sell something crazy like 12 million iPads in the current March quarter. To put things into perspective, in December of 2011 the iPad saw 111% year-over-year growth.

Munster believes that Apple will retain it’s majority share of the tablet market for at least the next three years.  He expects Apple to sell 66 million iPads this year and 176 million in 2015.

“We believe the unprecedented ramp of the iPad over the past year is evidence that the tablet market will be measurably larger than the PC market,” Munster wrote in a note to investors.

Furthermore Mark Moskowitz an analyst with JP Morgan Chase called the new iPad launch numbers “staggering” and that he expects to see “breakout growth” due to this past weekends numbers.  But Moskowitz believes that this is only the beginning as he believes the iPads numbers will be boosted even further once Microsoft comes out with an Office Suite for the iPad.

“Currently, the enterprise vertical represents less than 10% of tablet units, but once Office is available on the iPad, we think that enterprises will regard the tablet as a productivity device.”

It looks like Tim Cook wasn’t kidding when he spoke of the “Post PC Era” during his keynote speech a couple weeks ago in San Fransisco.  Apple is way out in front of the tablet market and it just doesn’t seem feasible that Samsung or any other competitor will be catching up with them anytime soon.