Greenpeace Stages Protest On the Roof Of Apple’s European Headquarters

Yesterday we reported that environmental organization Greenpeace released a report condemning Apple for the use of coal-powered energy at their data super-center plant they created to power iCloud in Maiden, North Carolina. In the report the environmental activist group even went as far to say that “icloud is the dirtiest thing on the internet“. Well if you thought Greenpeace was done with Apple there then boy are you mistaken.

This morning at about 7a.m. local time demonstrators scaled the top of Apple’s European headquarters in Cork, Ireland and placed signs on the building with the letters spelling out “clean our cloud“. Local police and firefighters arrived on the scene after the protest began while Greenpeace members passed out pamphlets to Apple employees as they entered the building. The protesters voluntarily came down off the roof about an hour after the demonstration began. 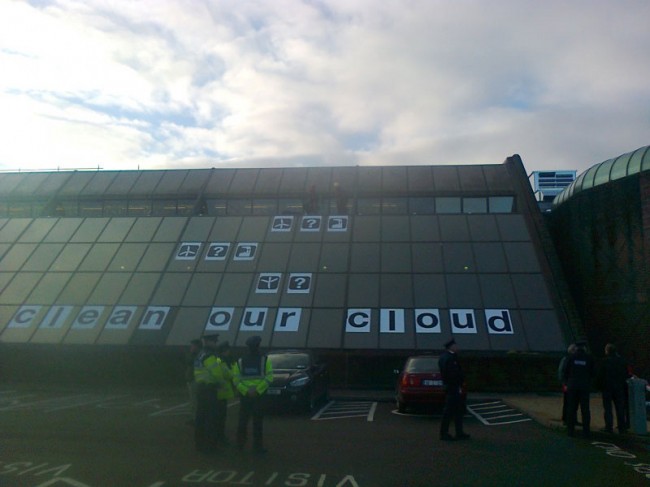 The protests were geared towards bringing attention to their report they released yesterday titled, “How Clean is Your iCloud” where they contested that Apple only uses about 10 percent green energy to power their Maiden, NC plant , with the other 90 percent coming from highly polluted coal powered energy.

But Apple was quick to refute that claim releasing a statement yesterday stating:

“Our data center in North Carolina will draw about 20 megawatts at full capacity, and we are on track to supply more than 60 percent of that power on-site from renewable sources including a solar farm and fuel cell installation which will each be the largest of their kind in the country,” spokeswoman Kristin Huguet said. ” We believe this industry leading project will make Maiden the greenest data center ever built, and it will be joined next year by our new facility in Oregon running on 100 percent renewable energy.”

This isn’t the first time that Greenpeace has come after Apple. Their quarrel goes back as far as October of 2006, where Greenpeace showed up at the MacExpo in London during their “Green My Apple” campaign where they were eventually forced to close down their booth.