Greenpeace Says iCloud Is The Dirtiest Thing On The Internet 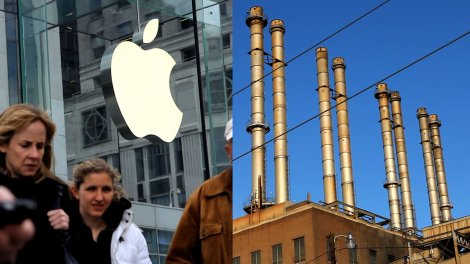 Environmental activist group Greenpeace has just released a report condemning Apple for using ‘asthma-inducing climate-destroying coal’ which they say makes iCloud ‘the dirtiest thing on the Internet’. Where are these accusations coming from? Actually there is some truth to back up Greenpeace argument. To power iCloud Apple built a data supercenter in Maiden, North Carolina. Apple has been increasingly interested recently in powering their manufacturing plants with forms of solar energy. The cupertino-based company has even been reportedly working on a 20 megawatt solar farm and a 5 megawatt fuel cell facility at it’s Maiden, NC data supercenter.

The only problem according to Greenpeace is that green energy only covers about 10 percent of the data supercenter’s power needs. The remaining 90 percent comes from the local power grid which is one of the dirtiest in the country and is mostly powered by coal.

To deliver iCloud services, Apple has dramatically expanded its data center infrastructure. It has invested at least $1bn in an “iDataCenter” in North Carolina, one of the world’s largest data centers, and just announced another facility to be built in Prineville, Oregon. Unfortunately, both of these investments are powered by utilities that rely mostly on coal power. Given the lack of transparency, siting policy or a clear commitment to power the iCloud with renewable energy, Apple is finding itself behind other companies such as Facebook and Google who are angling to control a bigger piece of the cloud.

Greenpeace has also been just as critical of Microsoft and Amazon about their production plants. However Google and Facebook have been commended by GreenPeace for prioritizing green energy over filthy coal produced energy.