Back in May, we reported on Google bypassing Safari’s privacy settings in iOS. This little slip-up got Google in some massive trouble with the FTC and has been in hot water facing a penalty. Well it looks like the FTC got their way…

Google is set to pay a record $22.5 million penalty for the security breach in Safari for iOS.The FTC has now officially announced the fine and details regarding the matter:

The settlement is part of the FTC’s ongoing efforts make sure companies live up to the privacy promises they make to consumers, and is the largest penalty the agency has ever obtained for a violation of a Commission order. In addition to the civil penalty, the order also requires Google to disable all the tracking cookies it had said it would not place on consumers’ computers.

“The record setting penalty in this matter sends a clear message to all companies under an FTC privacy order,” said Jon Leibowitz, Chairman of the FTC. “No matter how big or small, all companies must abide by FTC orders against them and keep their privacy promises to consumers, or they will end up paying many times what it would have cost to comply in the first place.”

The entire case was made on the fact that Google took advantage of a loophole in Safari that was designed to prevent the placement of third-party cookies. According to MacRumors, Google used “invisible web forms to trick Safari into thinking that users had interacted with Google’s ads and thus allowing cookies to be placed on the device.” 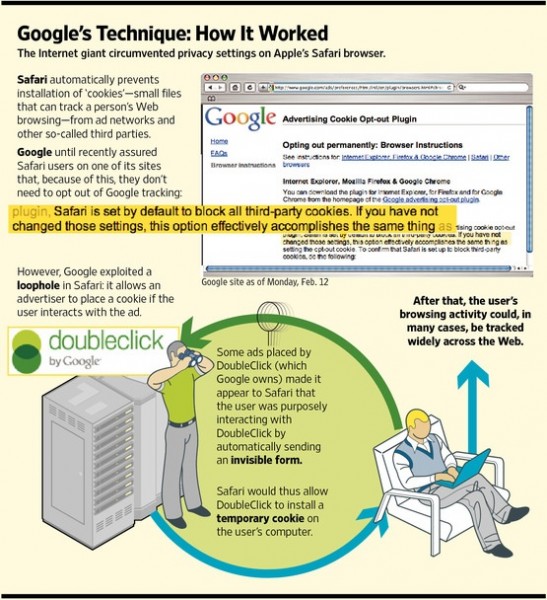 Pretty sneaky Google. I’m guessing all that effort didn’t pan out for them very well. Just to explain it again, Google was taking advantage of Safari’s privacy loophole to serve you better ads that you would be more likely to click on. While it’s a smart idea, it’s obviously a bad one as well. Hopefully Google has learned their lesson.