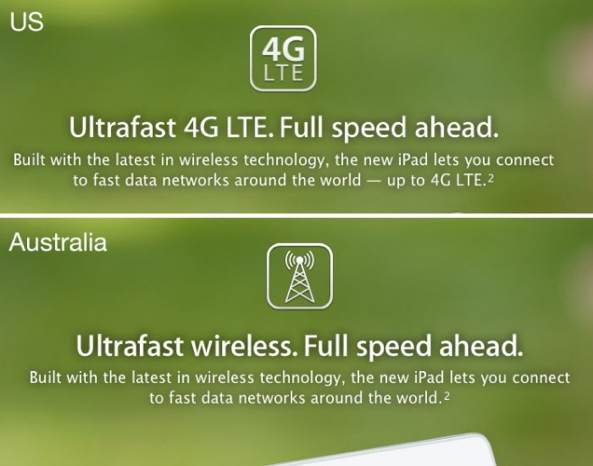 Updated U.S. vs Australian iPad Marketing (Courtesy of 9to5 mac)

Yesterday Australia initiated a law suit against Apple claiming the 4G marketing in conjunction with the new iPad was “misleading” to consumers, and apparently there are other countries getting involved now.

…yeah i went out and brought the new 4g+wifi 64gb ipad was soley to get a 4g sim but nup not in Australia, so my ipad is gonna be a paper weight for a couple of years till they introduce the 4g…

…I got mine from the apple store here in Perth Australia, they surely would of known that 4G doesn’t work here, I just feel ripped off…

So maybe that adds a bit of reality to the situation. Now it’s being reported that Denmark, Sweden, the UK, and New Zealand are keeping a watchful eye on the Australian situation, as it unfolds.

Apple recently updated Australian marketing on the Apple website to reflect the correction in marketing, ensuring there’s no confusion from here on out.

But will this stop here? Probably not. This marketing was set out worldwide and many countries have learned of this new iPad and it’s awesome “4G” capabilities. This is definitely a slip up on Apple’s behalf.

Authorities in Denmark have began overlooking the situation, as reported by MacNation.news.dk. Even the United Kingdom’s own Advertising Standards Authority gave Pocket-Lint this reponse:

We are aware of the news from Australia regarding the iPad 4G marketing claim… Without going through due process we can’t say whether the (UK) ad is likely to be problematic. If anyone has concerns about the iPad ad then they can lodge a complaint with us and we will establish whether or not there is a problem under the Code.

The Wall Street Journal reported on Apple’s Swedish issues, this is a quote from SCA lawyer Marek Andersson:

One may rightfully ask if the marketing of the new iPad is misleading,” Mr. Andersson said. While iPad is equipped with 4G connectivity, it will only work in the U.S. and Canada. The question is whether this information is clear enough in Apple’s marketing.

So I guess we’ll be standing by waiting for more updates on this situation. But it looks as if Apple’s going to need a little marketing overhaul in the iPad department. Currently 4G LTE is only available on certain networks. Those of which do not exist in the countries above plus many others.

Apple really did a great thing introducing LTE on the new iPad but I guess they went about it wrong. At least they are taking ethical approaches to hopefully correct this problem. Though, I’m sure this isn’t the last we’ll hear about the 4G LTE marketing issues.

What do you think of this mess?

Also you don’t need a 4G iPad, you can get a FREE WiFi one from us!

That’s right we’re giving one away. Click here for details.