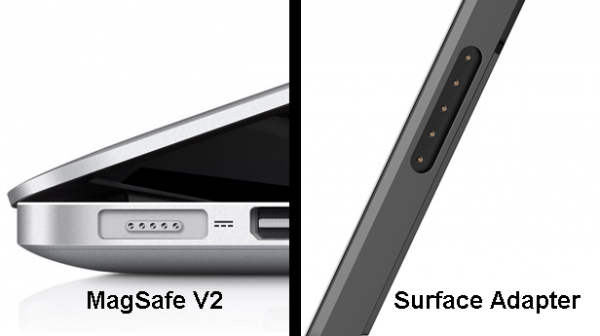 Oh no. Here we go… Microsoft unveiled their new tablet PC ‘Surface’ the other day and for the most part people are pretty impressed with it. I have to give it up to Microsoft here, it’s a good looking piece of technology. But will Apple and Microsoft go to war now over the Surface’s charging adapter. Maybe…

The charging port, shown in the picture above, clearly depicts a 5-pin connector that’s very similar to Apple’s MagSafe adapters. Apple has been using MagSafe for quite some time now on their MacBooks. It’s become very useful when using your MacBook. With Magsafe if you accidentally trip over your charger’s cable you’re safe. Instead of your computer flying off the table to a certain death, MagSafe instantly disconnects the cable, as it’s held on by a magnet.

As you can see above, the ports look very similar and work in the same fashion with the only exception that Microsoft’s transfers data as well. So are they in the clear? Unlikely. Apple filed a patent back in January for the use of a MagSafe adapter for iPhone / iPad that utilizes syncing capabilities.

There’s no word on war yet, and honestly it would be a shame to see it come to blows. Even though Apple’s patent hasn’t been approved by the USPTO, they still have dated Microsoft’s adaption with their submission. Microsoft just submitted for the patent last week.

I doubt anything will transpire from this any time in the near future, but knowing the facts involved here I wouldn’t be surprised. I have to admit, the design and functionality are extremely similar. Let’s hope things stay clean.