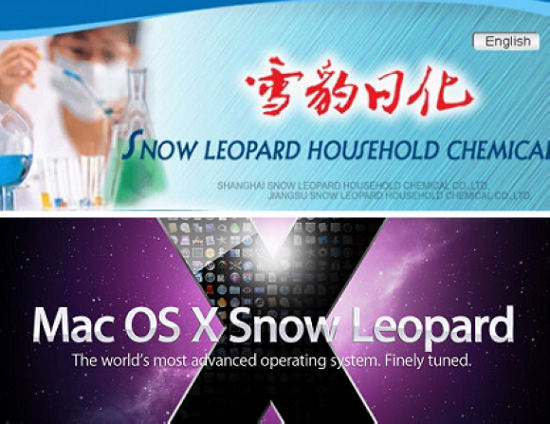 Here we go again. Just when we put one trademark battle to rest, another one pops up just like that. But lawsuits are good for business, right Samsung? Looks like a Chinese chemical company is suing Apple over Snow Leopard…

Yup that’s right you heard it. Chinese chemical company, Jiangsu Xuebao filed a lawsuit against Apple in a Shanghai  court and a judge ACTUALLY agreed to hear the case on July 10th. Not only is this stupid but Apple doesn’t even sell Snow Leopard anymore.

The company claims Apple is violating their trademark on Snow Leopard and wants $80,000 in damages!! The chinese comapny, Jiangsue Xuebao has apparently owned the trademark for over ten years and wants to protect it. They’re concerned that someone will confused their Snow Leopard household chemical for Aple’s late operating system.

Not only is Jiangsue Xuebao suing Apple but other companies who marketed Snow Leopard as well. This is completely rediculous and I highly doubt they’ll win this case. Who confuses a “household cleaner” with an operating system. I can see it now… “Ah damn I accidently installed the wrong Snow Leopard on my MacBook!! Meh, at least it’s clean now.”

As you could imaging this is straight up silly.

What’s next? The Zoo takes Apple to court for people confusing the OS X with real lions?