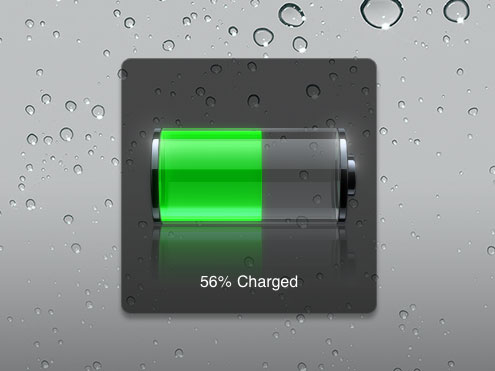 On Thursday we mentioned how the new iPad‘s battery gauge in iOS actually lies to you. It was said that you should charge your battery for up to a couple hours after the iPad claimed it was “100%” charged.

According to DisplayMate, the new iPad’s battery actually has a fully charged run-time of about 11.6 hours but based on the 100% battery indicatorit will only run about 10.4 hours. Indeed, this does seem odd when in life we’re taught that 100% means done, full, over, etc…

What could possibly be the explanation behind this?

According to ZDNET, their own Adrian Kingsley-Hughes uncovered some details and says the iPad is “behaving just as it should and that Apple displays the 100 percent charge indicator at a lower capacity, (around 97 percent) to keep the battery safe and healthy.”

The wrinkle is that when the iPad 3 battery indicator first says “100%,” the battery is actually only 90% charged and you get 1.2 hours less running time. However if you recharge your iPad 3 unattended (and off or in sleep mode), especially overnight, you will get the necessary extra charging time to achieve its maximum running time.

DisplayMate weighed in about charge time in their iPad Display Technology Shootout saying:

It takes a relatively long time to recharge the massive battery in the new iPad – over 5½ hours when it is fully discharged. That’s only if the new iPad is off or in sleep mode – if you try recharging while using the new iPad I estimate that it will take about 20 hours if the display is set to Maximum Brightness.

That’s some massive charging time… Apparently Apple has always had post-100% charge time for every iOS device. We just so happen to be noticing it now due to the 70% increase in battery capacity on the new iPad. I’m sure some further tests in the near future will shed some more light on this situation.

According to Jon Fortt of CNBC, ”Apple is saying… if you charge it more [ than indicated by iOS ], you could actually harm the longevity of the battery.”

When will all the madness stop?

Personally, regardless of how long I charge my new iPad, I still get more than exceptional battery life from it. But I also agree that 100% SHOULD mean 100%. I’m sure we’ll see this fixed in silent software updates. I highly doubt Apple will address this “issue” themselves, but more than likely just push a software release with this problem as a highlighted fix in the description.

If you don’t have an iPad, no worries, we’re giving one away! Check it out!