Earlier this week the guys over at AppleInsider discovered a patent application turned in by Apple entitled “3D Object Recognition.” Over the past few months Apple has shown an increased interest in secure facial recognition technology which takes a two-dimensional picture of someone’s face and turns it into a 3d image for better accuracy.

The application that was filed by Polar Rose was submitted before Apple actually acquired the company leaving parts of the application a little less consumer-oriented then Apple would have liked. For example, the filing goes into detail about how the technology could be used for government security purposes such as facial verification of passports when people are traveling abroad.The filing also goes into detail on how to use the technology to automatically identify a persons face from a live video without their knowledge.

Last year Apple introduced face detection when shooting still images with the iPhone 4s. Apple technology allows the iPhone 4s to detect up to 10 faces in a single photo.

But the application that was filed by Apple this week suggests that the Cupertino-based company could go much further than just simply detecting a face or recognizing it in still photos. The new technology could allow Apple to implement new security features in Macs and iOS devices, allowing the devices to more accurately identify a person identity.

A nice mock up of the technology was created by AppleInsider: 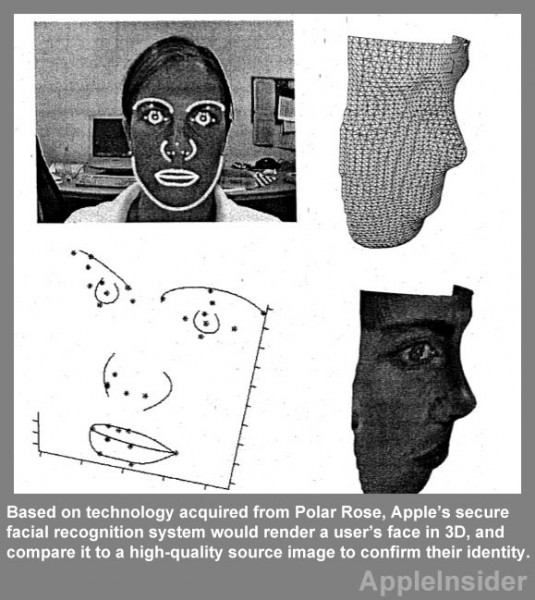 The application, which was first made public this week, was filed by Apple with the United States Patent and Trademark Office in November of 2011. The invention is credited to Jan Eric Solem and Fredrik Kahl of Polar Rose.