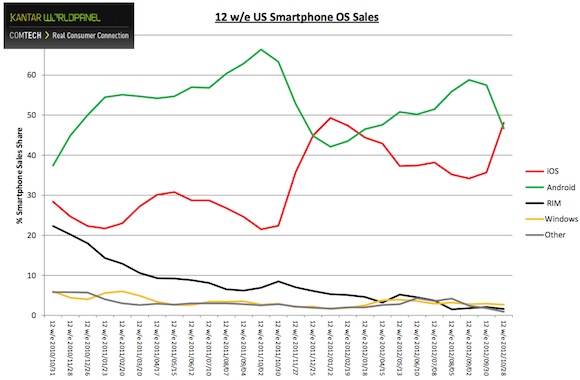 A new report from research firm Kantar Worldpanel states that Apple has once again regained its top spot in smartphone sales. According to the report, the iPhone 5’s strength has helped Apple reach this spot again.

Dominic Sunnebo, global consumer insight director at Kantar Worldpanel ComTech, comments: “The last time we saw iOS overtake Android in the US was when the iPhone 4S was released and Apple managed to retain its lead for three consecutive periods. This time we predict that Apple will beat its previous high of 49.3% and achieve its highest ever share of the US smartphone market within the next two periods.”

As shown in the chart, Apple’s smartphone market share between August-October was 48.1%, compared to 46.7% from Android sales. That’s not a huge win for Apple, but I’m sure they don’t mind.