Apple Stock Closes At Over $600 For The First Time Today 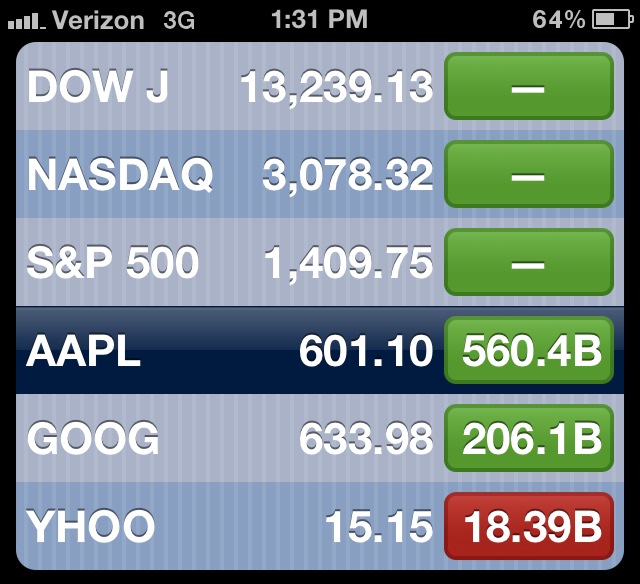 If you own Apple stock then you should be be happy camper.  Earlier today Tim Cook and CFO Peter Oppenheimer announced in a conference call that Apple will be issuing dividends and stock buybacks.

If that wasn’t enough to make Apple stockholder’s sleep better tonight then maybe it will comfort them to know that Apple stock closed at over $600 for the first time today.  $601.10 to be exact. Apple has seen incredible growth in the stock market recently moving up 200 points since November, and is now the most valuable company in the world beating out Exxon by huge numbers.

Apple’s growth doesn’t look like it plans on slowing down anytime soon.  It’s only been about a month since the Cupertino based company hit the $500 a share mark.  Some analysts and experts believe that Apple will reach $700 a share by the end of the year, and maybe even a $1000 a share by this time next year.  That would make Apple the world’s first Trillion dollar company!

But what do analysts and experts know?  Many of them predicted that Apple’s stock would fall after the passing of the late Steve Jobs.  So far that doesn’t seem to be the case. as it looks like Jobs built an unshakable foundation that will allow  Cupertino to be around for a very long time.