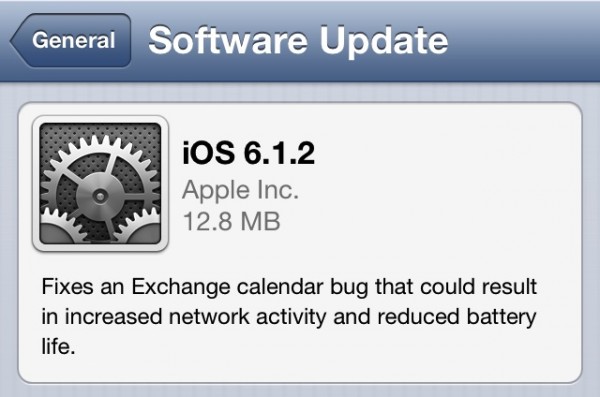 Apple has released iOS 6.1.2 to fix an Exchange calendar bug. The update is available now via OTA (Settings > General > Software Update) or through iTunes.

Fixes and Exchange calendar bug that could result in increased network activity and reduced battery life.

Remember, if you’re jailbroken, you’ll want to avoid this update for now. There’s no word on if the Evasi0n jailbreak has been patched in this release. Follow the Evad3rs on Twitter to find out information as it becomes available.

Update: Planetbeing has tweeted the following in regards to the iOS 6 jailbreak with this new version of iOS:

Not yet able to test all devices, but it’s looking good for 6.1.2. iPad mini wi-fi and iPhone 5 are still jailbreakable.