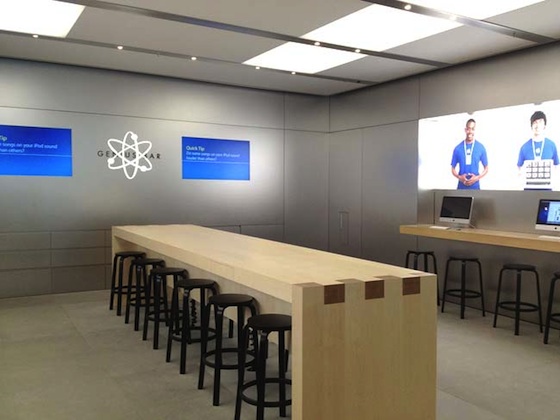 Everyone loves the Genius Bar right? Sometimes it’s entirely too busy though (At least by my house). Good news is Apple may be looking to expand the productivity and capacity of the Genius bar soon…

ifoAppleStore reports Apple has plans to implement a new Genius Bar layout (shown in the photo above). The new design would allow easier access to your local Apple Store geniuses. The redesign shifts the entire Genius Bar 90 degrees and would provide seating for customers on both sides of the table.

Overall the entire design would break the barrier between customer and employee allowing the Apple Store Geniuses to be on both sides of the table intermingling with the customers. This would also increase the stool count from 7 to 12.

This new 90-degree Genius Bar turn solution would be particularly effective at narrow stores where there is limited room for seated customers. The improvement seems to come at the expense of the very popular kids area, with its round, black seats and iPads loaded with children’s software. It’s not clear if this design change will be rolled out to other stores or if it’s simply being tested at this specific store.

As noted by ifoAppleStore, the new design would leave Apple no choice but to move or completely give up the kids tables usually located where the new table would be positioned. There’s no word on when or if this change will happen, but I can definitely see how helping more customers at once would be beneficial to the high traffic levels at the Apple Store.

What do you think about this new design?