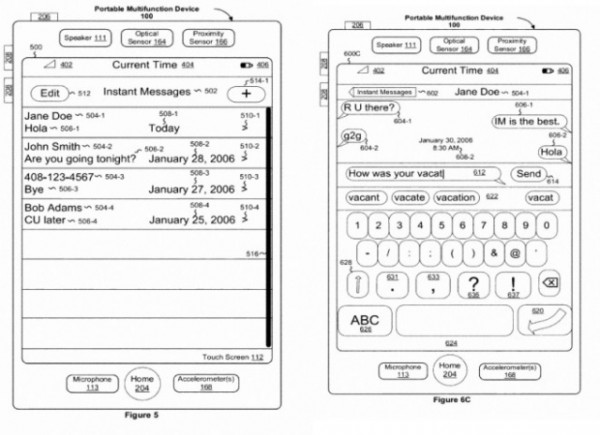 Today Apple was granted Patent number 8,223,134 entitled, “Portable electronic device, method, and graphical user interface for displaying electronic lists and documents,” which holds the key to pretty much everything currently implemented in the mobile OS market and competition…

The “the mother of all software patents” covers all aspects of iOS, much of which has been used by Android and other competitors. The patent describes a user interface including the use of email, camera, web browser, phone, media player, maps, widgets, searching, notes, and notably, a multitouch user interface.

Most all of the features covered under this patent have most certainly been implemented in competitor phones and operating systems. This could mean collateral damage for the competition.

According to Kevin Krause from Phandroid Android has a reason to worry.

Apple’s latest patent should give Google and its stable of Android device manufacturers reason to worry. Granted just today, the latest addition to the Cupertino-based tech giant’s stable of intellectual property could be the mother of all smartphone software patents […]

The bad news for Android and its hardware partners is that this patent will likely become a stable of future patent infringement claims coming from Apple’s court. The effects could be swift and lethal, depending on how descriptions of user interface elements are leveraged.

Patently Apple’s Jack Purcher, argues that Apple should take out the competition.

In 2007, Samsung, HTC, Google and all others in the industry didn’t have a smartphone with the likes of Apple’s iPhone features. They didn’t have the solutions that Apple eloquently brought to market to make a smartphone truly smart. Apple carefully and meticulously crafted a full end-to-end smartphone solution. So when the copycats and their followers whine in public and on blogs that Apple should learn to compete instead of initiate litigation – I bowl over with laughter.

There’s no denying that Apple is a legal stickler for the most part, but honestly the competition has a pretty solid track record of shamelessly ripping off Cupertino. I’m sure this new patent is going to have a massive impact of future smartphones. The only question is, will Apple use this newly granted patent to attack current devices on the market?

Source: Fortune via Cult of Mac