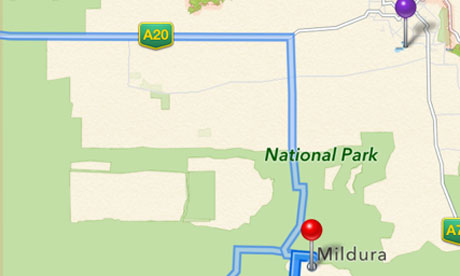 Yesterday, Australian police warned against the use of iOS 6 Maps due to some travelers being stranded after using Maps for guidance to a city. Maps led them astray and Apple has since repaired the error, but it wasn’t exactly Cupertino’s fault.

The travelers were on their way to Mildura when they ended up in a remote area of the Murray-Sunset National Park. The iOS 6 Maps app listed Mildura as being 45 miles away from its actual location, but apparently Apple got the location data from the official Australian Gazetteer. Oops.

In this case, the Australian Gazetteer – the authoritative list of 300,000-plus placenames, complete with coordinates – includes two Milduras. One is the “real” town, the other is an entry for “Mildura Rural City”, coordinates -34.79724 141.76108. It’s this second entry that points to the middle of the Murray-Sunset National Park, just near a spot called Rocket Lake.

The image above shows the exact location of the town marked by the red pin, while the real town is marked with a purple pin. Either way, Apple should be looking into these type of things. I’m sure there are plenty of cities that are off a little from their exact geographical location. This isn’t really an excuse for any other bad iOS 6 Maps data.

Source: The Guardian / Register via MacRumors