Will the iPad 3 or iPad HD include 1GB of RAM?

Tomorrow morning at 10AM PST, Apple will unveil it’s third generation iPad. There has been tons of speculation as to what components and features the new iPad will include. A new one that recently came into play from Chronic Wire is stating the iPad 3 will include 1GB of RAM.  This is a step up from the 512MB of RAM the iPad 2 carried.

According to a screenshot and some relatively simple math, they have concluded this is a likely addition to the iPad 3. BGR posted some pretty exclusive screenshots of an iPad 3 development unit which showed,

Now to some of you this may not make sense but to Chronic Wire a simple math problem calculated the amount of RAM this “iPad 3” could quite possibly include. 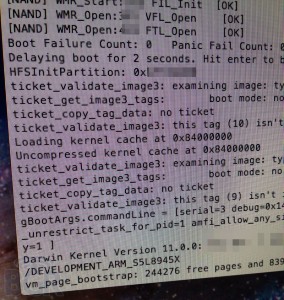 Since the iPad 2 had half that amount, it seems like a well deserved upgrade for the iPad 3 or iPad HD. I would also like to add that when your stepping up all of the other internal components of any device changes must be made all around to accommodate the new technology inside.

So tomorrow we’ll all find out! Tim Cook should be hosting the event. Will it be an iPad 3 or an iPad HD. This seems to be a huge question in the “names” department. Either way, the third gen iPad is rumored to emplor an A5X dual-core processor, better cameras, Retina display, Siri support (meh maybe), 4G LTE, and better battery life. Let’s hope with all these upgrade they upgrade the battery as well.

If all these rumors are true this could mean a whole different experience on an iPad.