Tweetbot For Mac Has Hatched In The App Store

Looking for a nice Twitter client for your Mac? Tapbots has finally released Tweetbot for Mac, and in my opinion, it’s the best Twitter client available. Tweetbot has already made the number two spot in the Mac App Store charts … It’s that popular.

Tweetbot is a full-featured Mac OS X Twitter client with a lot of personality. Whether it’s the meticulously-crafted interface, sounds & animation, or features like multiple timelines & column views, there’s a lot to love about Tweetbot.

◆ Multiple Timelines. Quickly switch between your lists as your main timeline.
◆ Multiple Windows and Columns. Display timelines from different accounts side by side.
◆ Notification Center Support.
◆ Beautiful Retina graphics.
◆ Mute filters lets you block messages from users without unfollowing them. You can also mute hashtags and specific keywords.
◆ Sync timeline position, direct message read statuses and mute filters between your Mac, iPhone and iPad via iCloud.
◆ Support for multiple services like Pocket, Instapaper, Readability, CloudApp and Droplr.
◆ Save drafts, add locations and POI’s, attach photos/videos, manage your lists, and much more. 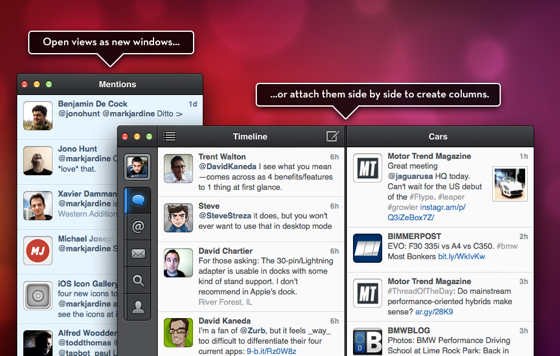 This app may rock, but it comes at a steep price. It’s currently available for $19.99 in the Mac App Store. You may be wondering why the price is so darn high, and Tapbots has a pretty good explanation.

If you think about it, it’s not that expensive. Twenty dollars for a quality piece of software that you use every day? That has been the price point for quality utility apps on the Mac for years. However, it’s not just the development time and attention we put into the app that commands the higher price.

Because of Twitter’s recent enforcement of token limits, we only have a limited number of tokens available for Tweetbot for Mac. These tokens dictate how many users Tweetbot for Mac can have. The app’s limit is separate from, but much smaller than, the limit for Tweetbot for iOS. Once we use up the tokens granted to us by Twitter, we will no longer be able to sell the app to new users. Tapbots will continue to support Tweetbot for Mac for existing customers at that time.

This limit and our desire to continue to support the app once we sell out is why we’ve priced Tweetbot for Mac a little higher than we’d like. It’s the best thing we can do for the long term viability of the product. We know some will not be happy about Tweetbot for Mac’s pricing, but the bottom line is Twitter needs to provide us with more tokens for us to be able to sell at a lower the price. We spent a year developing this app and it’s the only way for us to be able to make our money back and continue supporting it with updates in the future. Feel free to let Twitter know how you feel about it.

So if you’re in love with Twitter, you’ll definitely love this new app. Support the developers and let them support the app for years to come. Have you downloaded Tweetbot yet?

Check it out here in the Mac App Store.